The Radical SR1 is an entry level track car that comes in below £30,000 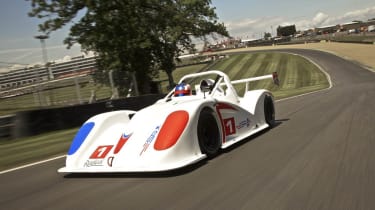 Radical has announced a new entry-level model for under £30k. The SR1 is aimed at trackday drivers and club racers. Designed by the same team that created the Radical SR-9 LMP2 race car, it is intended to mirror the current prototype racer's design. Powered by the 210bhp RPE-Suzuki four-cylinder engine found in many of Radical’s other models, the SR1 will hit 60mph in 3.6sec, power reaching the rear wheels through a six-speed sequential gearbox.

The SR1 is similar in spirit and price to the Ginetta G40R, but packs an extra 35bhp and sprints to 60mph 2.2sec faster. The spec is predictably focused, with the brakes consisting of 240mm ventilated discs and four-pot calipers and a Quaife ATB differential fitted as standard. Radical-specific Dunlop slick, wet and road tyre options are all offered. The two-seat SR1’s safety cell and deformable crash structure conforms to FIA standards and race-spec harnesses and an integral fire extinguisher are fitted.