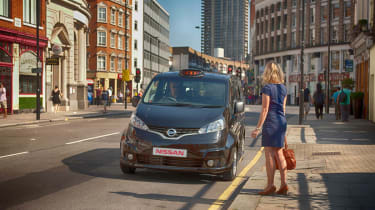 Nissan has unveiled a new taxi version of the NV200 van for London. Set to be priced substantially under its rivals, it’s likely to transform the streetscape of the capital.

London’s stringent ‘Conditions of Fitness’ standards for taxis have long stood as a barrier to manufacturers looking to offer their vehicles as London cabs. The best known of these is the requirement that any licenced black cab must have a turning circle of no more than 25ft to enable it to U-turn on narrow streets. At the moment London’s cab fleet is mostly made up of variants of the ‘classic’ TX taxi, which was introduced in the late 1990s and which is still being produced today.

Nissan has re-engineered the NV200 to meet the conditions of fitness requirements, with the front track boosted by a massive 200mm over the standard van and an innovative ‘revo-knuckle’ style front strut to give enough wheel articulation to meet the turning circle requirement. It will be offered with the choice of two 1.5-litre diesel engines, Renault-Nissan’s dCi four-cylinder in 89bhp and 109bhp states of tune. But as the automatic gearbox that all London’s cabbies regard as their right will only be available with the more powerful engine, you can anticipate that representing the vast majority of sales. Nissan is also committed to trialing an all-electric version of the cab next year, and potentially putting this on sale in 2014.

Other manufacturers have already tried to break into this highly specialised market, with a taxi-ised version of the Mercedes Vito van already passed for use in London. The Merc using hydraulically activated rear hubs to achieve the turning circle, and it’s fair to say that sales have been modest so far. Nissan is promising to substantially undercut the existing LTI TX4 with the NV200, which will go on sale for under £30,000. There are only 22,000 Hackney cabs in London, but Nissan sees the city’s global prominence as being a good way of promoting its brand – a less modified version of the NV200 has already been approved as the next taxi for New York City.