Volkswagen has revealed images of the new Beetle Cabriolet ahead of its international launch at the LA motor show. 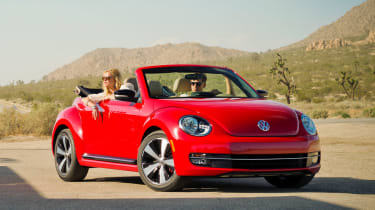 Volkswagen has revealed images and details of the new Beetle Cabriolet ahead of its official launch at the LA motor show in November. Like the previous model, it uses a fabric roof, which can be fully retracted in just ten seconds.

Like the standard hardtop Beetle model, a wide range of engines will be offered including the base level 103bhp 1.2-litre TSI, cooking 158bhp 1.4 TSI – with the hottest model in the range using the 197bhp 2.0 TSI engine. Both 1.6 and 2.0-litre diesel engine will also be offered.

New to the model is an active rollover protection system, triggering two extendable rams in the event of an accident, doing away with the need for a rollover bar.

Making its world debut at the Los Angeles motor show on 28 November, the Beetle Cabrio is due to go on sale in the UK in spring 2013, with prices to be announced nearer to launch.