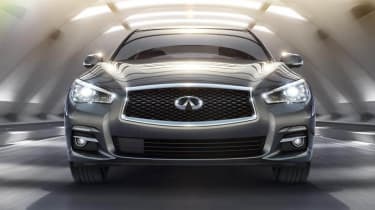 Infiniti has unveiled its latest BMW 3-series rival, the Q50. Debuting at the 2013 Detroit motor show, it replaces the G37 and debuts the brand’s new naming structure at the same time.

Full 2013 Detroit motor show coverage here The G37 was key to Infiniti’s introduction to Europe after many successful years in the US. And the Q50 aims to more substantially eat into 3-series, A4 and C-class sales, as well as steal thunder from the new Lexus IS, which also debuts at Detroit. The American-market Q50 will possess two powerplant options – a 3.7-litre V6 petrol with 328bhp and a hybrid model that mates a 3.5-litre V6 petrol with an electric motor, output totaling 360bhp. Power is sent to the rear wheels via a seven-speed automatic gearbox. All-wheel drive is optional. That layout is likely to be retained for European Q50s, though we can expect four-cylinder petrol and diesel options to keep it in line with its established rivals. It aims to trump them with a host of technology, including Direct Adaptive Steering, an electronic system that independently controls tyre angle and steering inputs and is reckoned to be faster reacting than a mechanical system. The driver can tweak steering ratios and effort. Noise cancellation technology aids refinement while Active Lane Control supplements the lane departure warning system by reacting to crosswinds and changes in road surface. Infiniti promises an exciting drive too, with both Sebastian Vettel and Sebastien Buemi providing dynamic input (thank Red Bull’s tie-up with Infiniti for that). To what extent we’re unsure, and will reserve judgement until we drive the Q50 ourselves. The US-market Infiniti Q50 launches in the summer, while the European car will be revealed at the 2013 Geneva motor show in March.