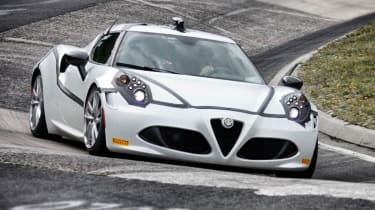 Alfa Romeo has confirmed that the 4C has lapped the Nurburgring in 8:04, which the company says is a record for a car with less than 250bhp, omitting the 7:55 time set by evo in 2000, driving a 230bhp Caterham R500 Superlight.

The lap time was set by journalist and Nordschleife expert Horst von Saurma, when driving the car on September 12, 2013. The time is also almost identical to the time set by one of the car’s biggest rivals – the Porsche Cayman S.

Undoubtedly contributing to the lap time around the Nordschleife, the Alfa 4C was fitted with a set of road legal, but extremely sticky, Pirelli P Zero Trofeo tyres. They are the most track-biased road tyres Pirelli offers, and were specially developed for the 4C.

With UK prices from £45,000, the Alfa 4C is expected to go on sale in early 2014. Worldwide 4C sales will be limited to 3500 units, although it is thought that a Spider version could well be on the cards. Here's the video of the lap: