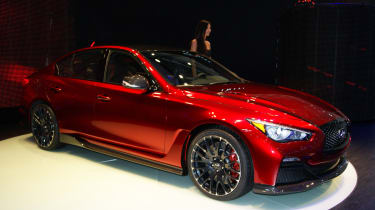 After teasing us with the Q50 Eau Rouge concept in Detroit, Infiniti chose the 2014 Geneva motor show to announce that its M3 rivalling super-saloon will harness power from a twin-turbo V6 to produce a considerable 559bhp and 442lb ft of torque.

The carmaker’s President, Johan de Nysschen, said ‘building on the extremely positive feedback on the Q50 Eau Rouge, we decided to further whet the appetite of performance sports saloon fans by engineering this powerful heart into our blood-red beast.’

Said heart has been taken from none other than Godzilla itself, the Nissan GT-R. As an already proven powertrain, the 3.8-litre will push power through a seven-speed automatic ‘box as opposed to the far racier six-speed twin-clutch from the GT-R. This certainly reflects that despite its supercar power, the Q50 will be a softer beast – in keeping with the premium image Infiniti wants to develop.

With F1-inspired styling and supercar power, the Q50 Eau Rouge would be the hottest saloon made by Nissan’s luxury vehicle division if it were to go into production. Infiniti hasn’t confirmed if it ever will however, but has acknowledged that it plans to build fast-saloons under the Eau Rouge tag. The name, borrowed from Spa-Francorchamp’s legendary corner, is used in relation to Infiniti’s partnership with F1 World Champions, Red Bull Racing.

Accompanying the Eau Rouge at Geneva, was the announcement that less potent Q50s will also see a new turbo-charged 2-litre engine added to the range. Producing 211bhp and 236lb ft of torque, the four-cylinder will drive the rear wheels through a seven-speed automatic ‘box. One of Infiniti’s biggest markets, China, will receive the new engine in Spring, before it is rolled out around the rest of globe later in the year.