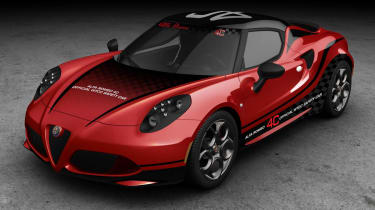 The Alfa Romeo 4C has been named the official safety car of the World Touring Car Championship.

The mid-engined, rear-drive Italian two-seater will come complete with a special pace car livery consisting of black inserts that accentuate the car’s curves and a chequered bonnet cover.

The 4C will make its debut in Morocco for the first race on April 12 at the Moulay El Hassan Circuit and will remain for the entire season, which finishes in mid-November at the Da Guia street circuit in Macau.

Chosen by the championship’s promoter Eurosport Events, the 4C was also given with the ‘Most Beautiful Car of the Year 2013’ award at the International Automobile Festival in Paris, dominating the competition by receiving just over 40 per cent of the voting share, ahead of the BMW 4-Series and Mercedes CLA. It’s not the first time Alfa Romeo has received the prize, the inaugural award being given to the 164 in 1988 and the Brera and MiTo both collecting an honour in 2005 and 2008 respectively.

Among the 4C’s highlights is its all-aluminium 1.7-litre turbo engine, producing 237bhp for a 4.5sec 0-60 time, which is mated to Alfa’s dual-clutch paddle-shift transmission. An open-top Alfa 4C Spider has just been announced too, making its first public appearance at the 2014 Geneva motor show in early March.