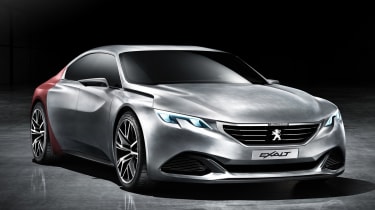 Peugeot has revealed the images and details of its new Exalt saloon concept car, which is scheduled to make its debut at the Beijing motor show next week.

The Exalt has developed stylistically from 2012’s Onyx concept car, and is constructed from a number of different materials, the main one being the hand-beaten steel outer panels. The rear of the car is covered in what Peugeot calls its new ‘Shark Skin’ material.

Few technical details are known, but Peugeot is boasting a high-tech HYbrid4 drivetrain. The Exalt combines the RCZ-R’s 266bhp 1.6-litre four-cylinder engine with a 50kW motor at the rear – making a total power output of 335bhp. Power from the combustion engine is transferred to the front via a six-speed manual gearbox, while the motor drives the rear wheels independently.

Peugeot is keen to impress the Chinese audience at Beijing, and has worked hard on the luxury interior to do so. There is again an emphasis on different materials; most apparent is the large central slab of wood, and various textiles throughout.

More details expected when the car is officially shown on April 20.