After images leaked onto the internet, Peugeot has fully revealed the Onyx supercar concept prior to its Paris show launch. Full details and gallery here 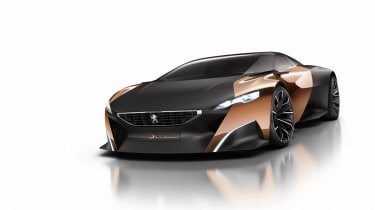 Peugeot’s 600bhp diesel-electric hybrid concept car, the Onyx, will be shown at the Paris motor show. The model almost certainly won’t go into production, but showcases a new face for future Peugeots.

The Onyx gets its power from a 3.7-litre diesel V8 engine and electric motor from the 908 Hybrid4 Le Mans car. This drivetrain never made it to Le Mans, following the company’s pull out of the sport earlier in the year.

Constructed from carbon fibre, the car weighs in at just 1100kg, and Peugeot is claiming a 0-62mph time ‘less than’ three seconds. The low weight is a result of Peugeot’s motorsport experience, with the basic carbon fibre structure weighing in at just 100kg.

The hybrid system is a development of the system Peugeot were developing for the 2012 Le Mans season, which uses kinetic energy recovery, harvesting power from the drivetrain and braking system to recharge the Lithium-ion batteries. This will add up to 80bhp extra, delivered automatically when needed.