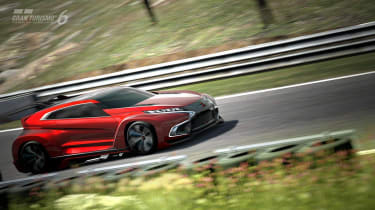 Thanks to its electric assisted powertrain and eight-speed dual-clutch transmission, it looks certain that the XR-PHEV Evolution will be substantially quicker than the current fastest Mitsubishi – the Evo X FQ-400 – due to the high torque figures performance hybrids can produce. Despite this, the Japanese carmaker has refrained from releasing exact numbers, but there’s no denying the video suggests the simulation concept looks pretty capable both on and off track.

The video also reveals how the new concept appears to borrow much of its styling from the XR-PHEV concept that was revealed in Tokyo last year. But in the case of this latest Evolution version, the simulation only car has been sufficiently beefed up with a large rear wing sitting on the rear of the carbonfibre body. A standout feature of the nose is the black front fascia, whilst sharply angled arches and aggressive side skirts sit beside 20-inch aluminium wheels.

Mitsubishi claims that its successful history in rallying has brought inspiration to the concept’s design, with footage of the car tackling Gran Turismo 6’s off-road stages suggesting this car could be a design influence in the next high performance Evo road car. Much like the XR-PHEV Evolution Vision Gran Turismo concept, the forthcoming Evo XI is set to be a high performance plug-in hybrid, so it’s not unthinkable to suggest both aesthetic and technical details for the future car may be hidden in this concept.

To try out Mitsubishi’s Vision Gran Turismo concept, you can purchase it from the ‘Cars’ section of the game, or alternatively obtain it by completing a lap in a new Seasonal Event.