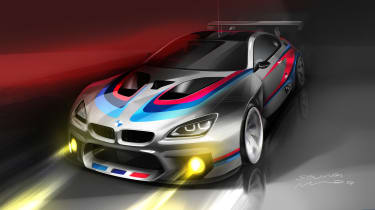 The company says development work for the racer is already in full swing, and has released teaser sketches to illustrate the new car’s ‘wow factor’. Like the Z4 GT3 it replaces, the M6 GT3 features racing-specific details like wider wheel arches front and rear, a deep front splitter and high-level rear spoiler.

BMW notes the difficulty in replacing a car that its racing customers are already very happy with, and will ensure that existing Z4 GT3 customers will receive full factory support even after its replacement debuts. 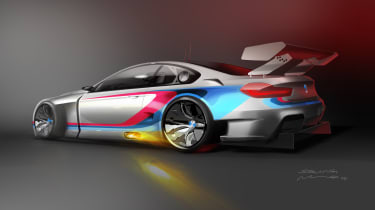 BMW Motorsport is also working on a suitable chassis setup, while the M6 will gain a racing-specification gearbox, racing ABS and a new electronics package before its wheels touch asphalt at a circuit. GT3 regulations require that no development work is allowed on competing vehicles after the season begins - so BMW must get it right first time to be competitive.

At the same time, engineers are focusing on safety, reliability and affordable running costs, ensuring the car holds the same appeal for customers as its predecessor.

‘There are few things more exciting than the development of a completely new car like the BMW M6 GT3,’ said BMW Motorsport Director, Jens Marquardt. ‘The Z4 GT3 has enjoyed success around the world in recent years…we obviously want to follow on from this success with the BMW M6 GT3.’

BMW says its racing customers will be able to order their cars through 2015, with the cars set to hit worldwide race circuits for the 2016 season.