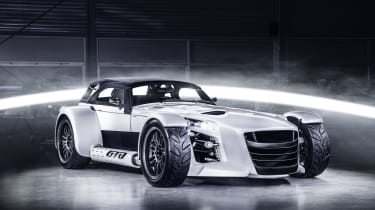 Dutch carmaker Donkervoort has kicked off 2015 by releasing this, the D8 GTO Bilster Berg Edition. Built to strictly limited numbers and based on an already ferocious machine, the Blister Berg Edition gains its name thanks to smashing the lap record at Germany’s Blister Berg circuit in 2014, enough to ensure it worries even some of the hardest chargers of supercar-dom.

Power remains the same as the ‘normal’ Performance D80 GTO, so that’s 380bhp at 5500rpm and 350lb ft of torque at 1750rpm, produced by an Audi sourced turbocharged 2.5-litre five-pot TFSI engine. Power is sent rearwards through a five-speed manual with a race clutch, and the addition of a lightened flywheel should help improve throttle response.

Where the Bilster Berg Edition really gains its performance is in weight loss. Weight has been trimmed by 10kg to 685kg, giving the Berg edition a power-to-weight ratio of 554bhp/ton. Phwoah.

In a straight line the standard car wasn’t exactly lacking: it’s capable of a mental 2.8sec 0-62mph sprint. But that weight loss will certainly help the Audi powerplant to propel the Dutch machine forwards with even greater scenery blurring effect.

Sitting on newly developed Intrax shock absorbers, the Bilster Berg Edition will corner harder than the standard D8 GTO. To handle this added agility, an extra roll cage has been added for even more structural rigidity.

The chassis is largely constructed of carbonfibre and Kevlar, as is the car’s new nose. Donkervoort says the nose gives it a ‘meaner look’ to go with all that savage performance. The roof is fabric and the interior gorgeously trimmed in leather with exposed carbon.

We loved our drive in the earlier D8 GTO, giving it a full five star rating in our test. A lighter weight and more aggressive chassis setup therefore certainly bodes well for the new Bilster Berg Edition.

Just 14 Donkervoort D8 GTO Bilster Berg Editions will be built, the production number being a nod to a highly successful 2014. Prices will start at 194,000 Euros, roughly £152,000 at the time of writing.