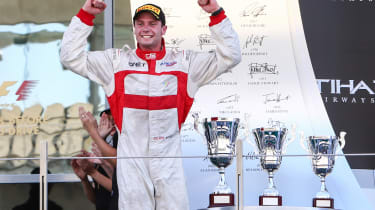 Red Bull has confirmed its 2015 Junior Team driver line up. Pierre Gasly will be joined by Dean Stoneman and Callum Ilott.

For those who don't know, Dean recently drove an Audi R8 V10 as part of our evo Battles series. You can watch that video below.

Dean Stoneman will be driving in Formula Renault 3.5 with team DAMS. A previous GP3 runner up, Stoneman will be joined by driver Nyck de Vries at the DAMS team. Previous championship winners for DAMS included Kevin Magnussen and Carlos Sainz JR.

Finally, you have Pierre Gasly, who continues on from his residence with Red Bull in 2014. Gasly will be racing in GP2 with DAMS.