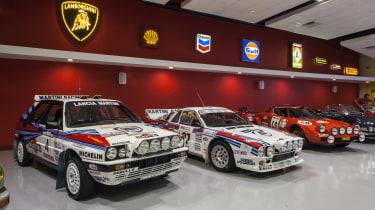 Four of the roughest, toughest, most pugnacious but unexpectedly graceful rally cars ever built are set to cause something of a disturbance at this year’s Amelia Island Concours d’Elegance.

The Florida event usually plays host to manicured classics, however the historic Lancia marque will hog the limelight with championship-winning cars from the comparatively exotic world of rally.

The dramatic quartet of cars is owned by Irish-American collector John Campion and belongs to a motorsport breed that’s a rare sight in the States – a place where rallying has historically been met with disinterest. 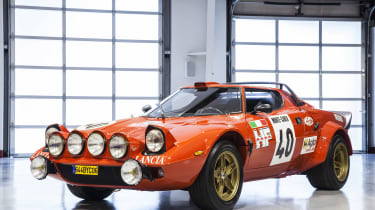 But vivid liveries, flared arches, light pods, extensive roll-cages and questionable build-quality should impress on visitors the nature of a sport that sees man and machine racing against the clock whatever the conditions. In this instance, all four cars are of the highest pedigree too, with each holding at least one championship win to its nameplate.

The earliest car is a 1969 Fulvia 1.6 HF, built during a time when the Turin marque was making its first foray into rallying. Works cars sent 132bhp developed by a 1584cc narrow-angle V4 to the front wheels, with wishbone suspension helping maximise grip.

Next up is the Stratos, which barely needs an introduction. After the Alpine-Renault A110 took overall victory in 1973, Lancia’s Ferrari-engined wedge dominated the World Rally Championship for four years before Fiat’s 131 Abarth started to come to the fore. ‘Stradale’ versions of the Stratos currently fetch upwards of £400,000 at auction. 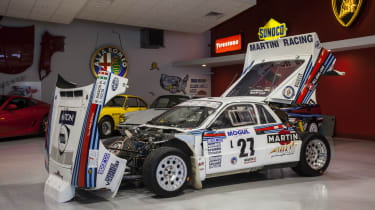 It’s difficult to pick a jewel in this crown of race cars, but the supercharged Lancia Rally 037 may be it. Arguably no other rally car has looked better while airborne, and in Group B trim the 980kg coupe developed roughly 350bhp. Campion’s car won the 1985 Targa Florio Rally at the hands of Dario Cerrato and looks superb dressed up in Martini livery.

Lancia’s final WRC involvement as a works team came in the form of the Delta HF Integrale. From humble origins as a Giugiaro-designed family hatchback in the late ’70s, four-wheel drive, a wider-track, turbocharging and astonishing manoeuverability helped transform it into the most successful rally car of all time.

Over its lifespan, the Group A-spec Integrale became wider and more powerful, spawning homologation monsters such as the second Evoluzione. Campion’s machine, however, represents the purest rally-going Interale, which was based on the original eight-valve road car.