We bring you the action live from Silverstone 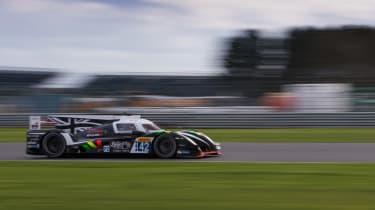 Silverstone plays host to the opening round of the 2015 World Endurance Championship. We're at the the circuit live blogging the race in its entirety. Follow the race here.

Qualifying confirmed the LMP1 and LMP2 races will be closely fought. Can Porsche hang on to its front row advantage, and can G-Drive fend of the challenge of its P2 rivals?

18:09 Race over, but we've still got more to come. Enjoy a gallery of some of the amazing cars racing today. 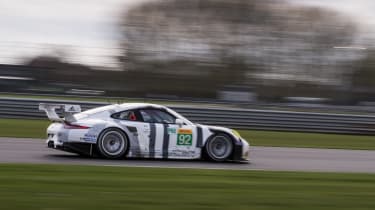 18:02 So that brings our day's racing to a close here at Silverstone. Audi confirmed its pace but Porsche wasn't far off. And don't discount the 2014 champions, Toyota. 2015 looks set to be a cracker.

18:00 Jani gets within a straight's distance of Fassler but the Audi manages to take the win with a 4.6sec gap. Buemi follows 14.8sec behind in third for Toyota Racing. G-Drive takes first and second in LMP2, and AF Corse holds onto the win in GTE.

17:55 Just 5mins remaining and the gap is down to within 9sec. Traffic could be the deciding factor in this race, or rather, which LMP1 driver can navigate his way through it with the least time lost. Headlights are ablaze on both cars.

17:52 11.97sec seperates the leading Audi from the chasing Porsche. That's after almost six hours of racing, confirming this year's WEC is set to be incredibly close.

17:47 Concerned faces in the Audi garage, but this does at least ensure we will have a close race for the win. The number seven car then dives into the pitlane for a splash of fuel, but the car will have to return to the pits to serve its penalty.

17:44 With just 17mins remaining the stewards announce the leading Audi of Fassler will have to serve a stop-go penalty for exceeding track limits.

17:11 And the number 18 Porsche of Jani comes into the pits to hand the lead to the Audi.

17:09 The number 7 Audi and number 18 Porsche battle for the lead, switching positions corner by corner as the more accelerative Porsche struggles to keep the downforce-laden Audi behind on high seed corners. There's no sign as to which car will hang onto the lead.

16:57 Scrubbed tyres go onto the number 7 Audi. The number 1 Toyota also rejoins after its stop.

16:46 158 laps in and the Audi's gap to second place continues to grow. That last lap Lotterer added another seven tenths to his lead.

16:43 We've been bringing you all this content today via a 4G LTE hotspot built into an Audi S3

16:07 Both Toyota and Audi bring their leading cars in for pitstops. The LMP1 class positions change as Audi's Lotterer now leads from Lieb in the Porsche. Nakajima runs in third in his TS040.

15:52 Aston Martin Racing's Darren Turner tells evo why the V8 Vantages aren't able to challenge for the lead: 'the second full-course yellow really caught us out. We'd already done our stops but the other cars hadn't, so they could take advantage of it. Today it didn't work in our favour.'

'There's some good pace however, and there's a long way to go. Our approach is to race flat out. Sports car races now are basically individual stints of one hour flat out racing. We'll be maximising everything. Today we've had two really good pitstops, so it's down to me and Stefan [Mucke] to do the job.'

Some detail shots from the Aston Martin pits

14:54 Audi's Lotterer is tucked up right behind Toyota's Davidson. Looks like we have ourselves another close race on for the lead as the Audi nearly takes advantage of the traffic.

14:45 Despite retiring from the race, Porsche's Mark Webber is upbeat about the 919 Hybrid's performance: 'The 17 car was strong today. We were better than we thought, so it was a nice surprise. But we want to improve. This mechanical issue doesn’t mean we shouldn’t be happy with the pace.'

14:31 Leading the LM GTE class is the Porsche 911 RSR of Porsche Team Manthey. AF Corse's number 51 Ferrari 458 Italia runs in second, ahead of the second 458 and Porsche 911 RSR. Aston Martin Racing's highest ranked V8 Vantage is the number 95 car. All of the aforementioned LM GTE cars are on the same lap (70), so the class race is very much still on.

14:27 After its last stop the number 8 Audi R18 is running in fourth, over a lap down on the leaders. The sister car is still just 1.6sec behind the leading Porsche.

14:20 Jani has to defend from Fassler on the Hanger Straight. Fassler is getting seriously racey and clearly doesn't want to spend much more time in Jani's slipstream.

We've stumbled across Nissan's LMP1 GT-R LM Nismo on show. Check out our pics below

The blue car is painted in Manchester City FC colours.

The Nissan GT-R LM Nismo will make its race debut at Le Mans. You can find out more about it here.

Tyres fact: LMGTE class cars are given six sets of tyres to use in qualifying and the race. Tyre management is key if a team wants to survive the race. Drivers will drive accordingly as to avoid graining and overheating the tyres.

Overheating can lead to pressure going up, causing the tyre's contact patch on the track's surface to reduce. This further reduces grip, accelerating the problem.

14:09 A stint generally lasts between 25-30 laps. Teams are allowed to change as few as one of the tyres in a stop. Silverstone's long, sweeping right handers ensure it's a tough circuit for the front left tyres. It's not uncommon for teams to switch tyres on the front axle to even wear and prolong usage between sets.

14:07  G-Drive's drivers have clearly managed to overcome issues with understeer and graining from Friday practice as they comfortably hold the top two places in LMP2.

Behind the scenes at Aston Martin Racing

14:04 The battle for the lead sees the number 7 Audi attacks Jani in the leading Porsche. Jani just manages to hold onto the lead after the cars run wheel to wheel. Fassler isn't done though and has another go. This battle isn't going to end anytime soon.

14:01 Strong British showing at Silverstone. One of the UK's top racing talents, James Calado, is currently behind the wheel of the number 71 Ferrari 458.

13:44 The number 2 Toyota leads 13sec to Jani. Fassler follows close behind in the first of the Audi R18s.

13:40 Our leader, Lieb, dives into the pits. He hops out of the race seat and hands over to Jani

13:38 He's running in fourth place in the number 1 car, behind Lieb in the Porsche and Treluyer in the Audi and Wurz in the sister TS040.

13:34 Di Grassi steers the number 8 Audi R18 into the pits with damage to the rear bodywork. The mechanics set about repairing it.

13:25 Webber pits in his Porsche and the car is rolled into the garage. He jumps out of the car and it looks as though the mechanics are trying to figure out what the issue is.

13:14 The fourth placed Audi driven by Di Grassi tucks in behind the sister car. It looks like Di Grassi has more pace and may attempt to make a move soon. Di Grassi lapped half a second faster on that last lap.

13:06 The G-Drive cars are placed first and second in LMP2. Only the Extreme Speed Motorsports car is on the same lap in P2.

13:00 One of the Aston Martins dives into the pits

12:45 All cars are limited to 60km/h during full-course yellows. Teams take advantage and make pitstops. The leading Porsche 919 Hybrid dives in to make its first stop.

12:44 First full-course yellow caused by the number 36 Oreca driven by Chatin. Appears his wheel fell off and caused the crash at Copse

12:03 Porsche holds onto its qualifying advantage as its drivers lead the way in first and second