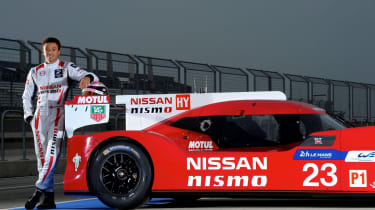 There are several constants in the world of motorsport. People will always complain about the quality of racing in F1. Touring cars will always be a crash-fest. Bernie Ecclestone will never understand young F1 fans. And mid-engined, rear-drive cars will always be the optimal layout for a racing car.

It’s hard to argue with most of those, but Nissan may disagree on the final point. This year at Le Mans, and throughout the World Endurance Championship season, it will compete with a front-engined, front-wheel drive car.

In the video above, Nismo’s global head of brand and marketing, Darren Cox, explains why this isn’t the hugely ambitious mistake it might seem.

On column inches at least, Nissan has already won. Even Audi’s original diesel Le Mans Prototype, the R10 TDI which debuted in 2006, didn’t attract as much attention as the front-wheel drive GT-R. 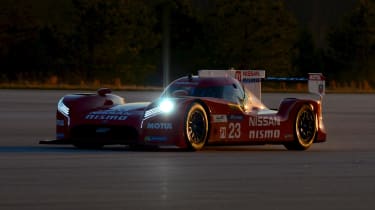 Cox cites several factors to Nissan’s advantage. One is the car’s packaging, thanks to that engine layout, and the effect it has on aerodynamics – much more of the front of the car can be dedicated to downforce. The car's tyres will play a part too. Michelin, which supply all the front-runners at Le Mans, is currently working closely with Nissan to find the right compound and size for the car's 14-inch wide front and 9-inch wide rear wheels.

The next is the engine. The car uses a twin-turbocharged V6, a layout Nissan is already familiar with in cars like the road-going (and racing) R35 GT-R.. The team turned to Nismo’s Super GT Championship engineers for their expertise in developing the turbocharged unit.

Finally, the car’s energy recovery systems are highly advanced. Cox describes the team’s mechanical flywheel system as ‘fiendishly complicated’, but ‘it could be our big advantage as well’.

Cox explains that the drivers are having to re-learn what they know in terms of how to drive the car, and getting the most from it will take some time.

evo spoke to Nissan GT-R LMP1 driver and GTAcademy winner Jann Mardenborough to get his feedback so far.

‘You do notice it’s front wheel drive’ Jann says, ‘but it’s a lot better than my perception of how it might be before driving the car’.

‘It’s a big leap,’ he continues, ‘but as racing drivers you always have to adapt to each different car and your circumstances’.

Surprisingly, the car’s characteristics aren’t as you’d expect. Huge, plough-on understeer isn’t an issue, and traction isn’t either. ‘The car is great in the wet’, adds Jann. ‘You have so much confidence in the car because it’s not as snappy as a rear-wheel drive car. We’ve got excellent traction too, though we’re still trying out differentials to see which works best.’ 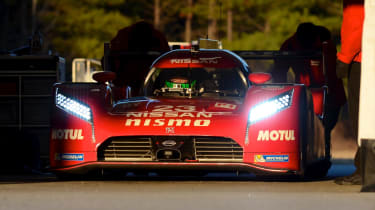 Jann is in no doubt as to the team’s goal, despite the uphill struggle inherent in experimenting with an entirely new vehicle.

‘We want to win! That’s our goal. The first few races [Silverstone and Spa] are going to be quite difficult for us, because the car has been designed for Le Mans. But Nissan’s goal is to win at Le Mans, so that’s my ambition too.’

Should Nissan achieve that goal, 2015 could be the year that everything we thought we knew about motorsport is turned on its head.