Winning Audi crosses the finish line only 4.6 seconds ahead of Porsche after six hours of racing 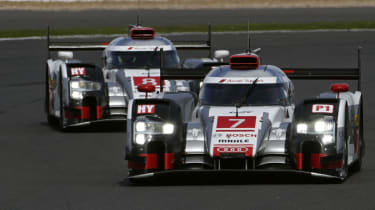 Audi Sport Team Joest took the chequered flag at Silverstone after a closely-fought tussle with rivals Porsche and Toyota.

The #7 Audi R18 e-tron quattro driven by Marcel Fässler, André Lotterer and Benoît Tréluyer took the lead on lap 96 in the fourth hour, after overcoming the #18 Porsche 919 Hybrid driven by Romain Dumas, Neel Jani and Marc Lieb following a mistake by the Porsche on the kerbs before the Wellington Straight.

After a driver switch, Fässler eased into a 72-second lead, only to be hit with a stop-go penalty for exceeding track limits while attempting to overtake a backmarker’s GTE Aston Martin.

The Swiss driver elected to pit for fuel before taking his penalty a lap later. This cut his lead down to eight seconds with only 15 minutes of the race left.

Jani’s 919 Hybrid began to reel in the R18 e-tron but not enough of the race remained for his attempt to be successful. 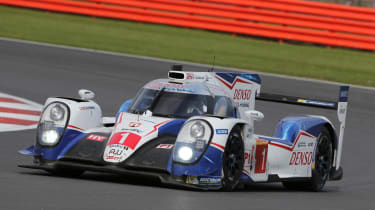 The #1 Toyota had led Dumas/Jani/Lieb’s Porsche in the final stages of the race, but better fuel management meant that the Porsche could leapfrog the Toyota when the Japanese team called their car into the pits for fuel.

Porsche’s qualifying dominance evaporated within 90 minutes of the race start, when the #17 car driven by Mark Webber, Brendon Hartley and Timo Bernhard sacrificed its 10 second lead and called into the pits for an unscheduled stop. Webber hopped out of the car as a gearbox issue prevented it from rejoining the race.

The sister #8 Audi lost time as a result of bodywork damage, with the seven minute delay relegating the R18 e-tron quattro of Lucas di Grassi, Loïc Duval and Oliver Jarvis to a fifth place finish after qualifying on the second row.

Toyota Racing secured a strong points haul as the #2 TS040 Hybrid of Alex Wurz, Stéphane Sarrazin and Mike Conway beat the #8 Audi to take fourth place. Toyota driver Anthony Davidson acknowledged the weakness of the Toyota at Silverstone, stating that circuits with higher tyre degradation were more advantageous to the team.

Race winner Marcel Fässler said: ‘I must say this (the battle with Jani) was one of the best fights I have had in my whole career and I really enjoyed this whole race today. I have to say it was pretty fair from Neel who gave space and I think we raced well together.’