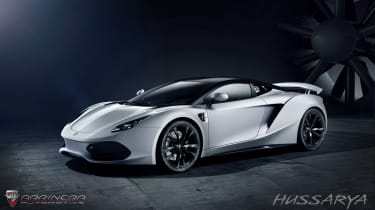 Polish car manufacturer Arrinera Automotive has unveiled its latest project at the 2015 Poznan Auto Show; a carbonfibre and Kevlar-bodied coupe which will be Poland’s first-ever supercar if put into production.

Use of the two lightweight materials not only keeps the car’s weight figure down, but increases the structural rigidity of the bodyshell. Lee Noble, the man originally behind Noble Cars and Fenix Automotive, helped develop the Hussarya's chassis.

In a world-first, the Hussarya also uses ultra-light, ultra-strong graphene in its construction, with Arrinera claiming that this increases the car’s resistance to damage.

The company’s previous 2011 concept car featured several Lamborghini styling cues, but its latest model features much less angular bodywork and there's more than a hint of McLaren MP4 in its proportions. In addition, the concept car used a 6.2-litre GM-sourced V8, said to facilitate a 0-62mph sprint in 3.2 seconds and top speed of 211mph. Arrinera has been cagey on performance details from the uprated 8.2-litre V8, but performance is expected to be improved for the production model and will be delivered to the rear wheels only.

Active aerodynamics also underline the car’s sporting intent, with a deployable active rear spoiler doubling as an air brake included in the design to bring the Hussarya to a quicker stop.

Arrinera’s flagship model will be built to order, with order books now open for prospective buyers to place their deposits despite no pricing being confirmed. The first 33 models will be released as launch editions with an unspecified level of additional kit included over the standard car.

Deliveries are pencilled in for the latter half of 2015 but no confirmation on pricing or the markets that the car will be offered in has been provided as yet by the carmaker.

The Hussarya’s unusual name is derived from Poland’s Hussar cavalry of the 16th century. The Polish start-up has also embarked upon a partnership with PPG Industries, who will provide the range of half-matte paint schemes with pearlescent elements available on the coupe.