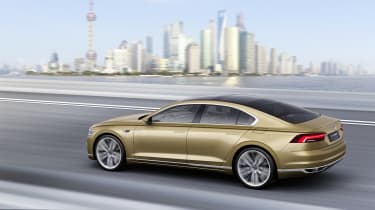 Volkswagen has unveiled a new performance hybrid concept car at the Shanghai auto show. Called the C Coupe GTE, the car is designed to sit between the Passat and Phaeton should it make production, the coupe’s styling aims to blend sporting performance with luxurious features.

The C Coupe GTE boats a total of 369lb ft of torque from its petrol and electric power sources and demonstrates the intended design direction for future Volkswagen saloons.

The hybrid concept car features a four-cylinder TSI petrol engine producing 207bhp and an eight-speed automatic gearbox for increased fuel efficiency. It can reach 62mph from a standing start in 8.6 seconds and will keep on accelerating until it reaches 144mph. 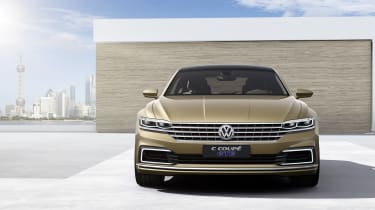 Fossil-fuelled performance is married to an electric motor integrated into the gearbox module which produces 122bhp. With an onboard lithium-ion battery that can be charged by regenerative braking or via a mains socket, the GTE can be driven up to 31 miles in all-electric ‘E-Mode’ with C02 emissions of just 55g/km. Volkswagen claims the total range will be 497 miles.

A ‘Chauffeur Mode’ is also fitted to the car, which allows information about the passenger’s appointments to be transferred via smartphone to the C Coupe’s onboard infotainment system.

An additional programme also plans out the navigation routes, filtering this information so only the most relevant current information is displayed. The Volkswagen can even transfer information about the final part of the route to be covered on foot to the passenger’s smartphone, known as ‘Last Mile Navigation’. 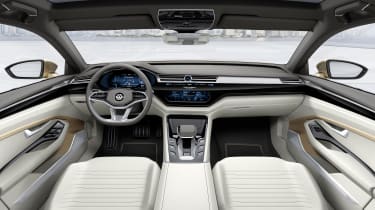 Volkswagen’s attempts to improve their image in the Chinese market are openly acknowledged by the marque. Klaus Bischoff, VW’s Head of Design, said: “The sports saloon unequivocally demonstrates our premium standards.”