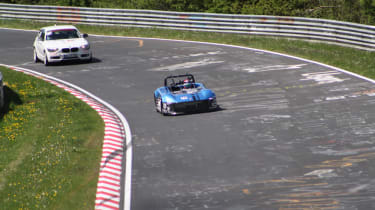 A student built fuel-cell car has broken the lap record for hydrogen vehicles at the Nürburgring, beating the previous record holder, Nissan, by more than 1min. The Delft University of Technology Forze VI racer lapped the 13-mile Nordschleife in 10min 42sec, comfortably undercutting Nissan’s previous record of 11min 58sec, which it set in 2008 with the FCV X-Trail concept.

Though the Forze VI lap time was captured on camera, its driver, Dutch ex-F1 driver and 1988 Le Mans 24 Hour winner Jan Lammers, had to contend with the traffic and faster cars of an open trackday. Additionally, Lammers passed a yellow flag on his lap, which, according to the ‘Ring’s regulations at least, means a lap time cannot be recorded.

Rather than chasing numbers however, the Forze VI run serves to demonstrate the ability of a hydrogen fuel-cell vehicle. ‘Hydrogen will be of great importance in the future,’ Menno Dalmijn, Forze Hydrogen Electric Racing Team’s manager, explains. ‘With this car, we want to promote hydrogen, to show what’s possible.’ 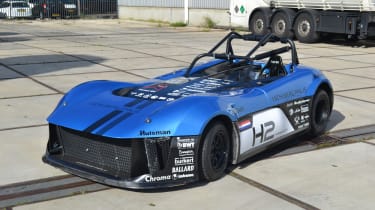 The car - which is based on the chassis of a Lotus Seven - is powered by a fuel-cell and electric motor that produces 134bhp. But thanks to the inclusion of an energy buffer, peak power can be boosted to 255bhp in short bursts.

‘On the straight, Jan was flat out, but coming into the corners it was actually better for him to ease off and brake earlier. This allowed the energy buffer [with super capacitors] to store energy that could be used on the corner exit.’ This confirms that it was faster for Jan to use a 'lift and coast' method rather than to fully attack each braking zone. Menno says that potential future fitment of a regenerative braking system would negate this, however.

The car weighs just 860kg, and is claimed to be capable of accelerating from 0-62mph in less than 4sec. Theoretical top speed is an estimated as 130mph, but Lammers reached 106mph on his lap. ‘The car is also a lot more energy efficient than a combustion engine car,’ confirms Menno. ‘Our motor is about 50 to 60 per cent efficient, converting at least 50 per cent of the energy into kinetic energy. A combustion engine is normally closer to 35 per cent.’

So how does it work? Energy is generated through the controlled reaction of hydrogen and oxygen. But the high levels of efficiency are possible thanks to the use of a high-pressure air system which features two 350 bar tanks. Forze claims that as much of 5000 litres of air can pass through the system. 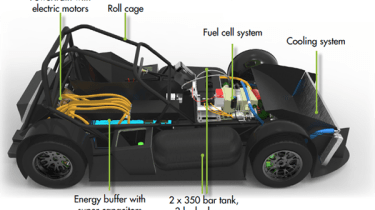 According to Menno, hydrogen is so effective at storing energy that just 3kg of the gas was needed to power the Forze VI around the Nordshleife. A quick calculation reveals that in a petrol car averaging 10mpg, you’d need more than 4.1kg of fuel to complete the lap.

The system isn’t without its challenges though. Cooling represented a substantial hurdle in the development of the car, because the motors, direct current converter, energy buffer and air pump all need to be cooled. As such, a large cooling system was mounted at the front of the car. As the Seven chassis was also designed to use a combustion engine, several modifications had to be made to enable it to safely house the hydrogen setup.

Job done then? Not exactly. The team might have successfully demonstrated the drivetrain’s ability, but there’s more work on the agenda. ‘We’re taking the car racing,’ says Menno. ‘We’re going to race other vehicles, including combustion engines, to prove that we can beat them.’ And it doesn’t stop there, because long term the team wants to develop a pure hydrogen car for the 24 Hours of Le Mans.

It’s an ambitious plan, but the steps made on the Nürburgring could mean that one day, the Forze team will race on the global stage in a zero emissions car.