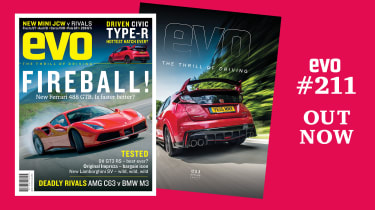 evo’s faithful subscribers have already received their copy of the latest issue, but for those who haven’t yet subscribed, you can now pick up a copy of evo 211 from all good supermarkets and newsagents.

It just so happens that the August 2015 issue is one of our very best yet, with no less than four of the year’s most eagerly anticipated high performance cars mixed into its pages with several other key machines. Ferrari, Lamborghini and Porsche are star names, but a first drive in Honda’s first turbocharged Type R Civic and the lightest ever Subaru Impreza also feature.

Want to know more? Read on for a full rundown of evo 211’s contents.

Jethro Bovindgon drives what is probably the most divisive car to leave the gates of Maranello. His mission? To decipher whether the boosted 661bhp 488 GTB can really move the game on from its adored predecessor, the 458 Italia. And let us tell you, it’s no easy feat, especially when the deafening sound of the ultimate 458, the Speciale, and its razor-sharp atmospheric V8 is still so fresh in our memories… 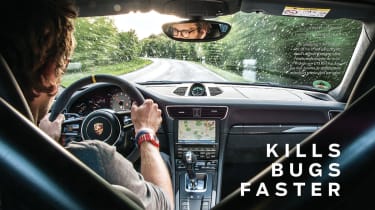 Like the 488, the 911 GT3 RS carries the weight of a very, very capable base model on its shoulders (or should we say wide-arches?). We love the 911 GT3, but to make the RS, Porsche has had to extensively modify its chassis, and perhaps most worryingly, has retuned the GT3’s engine so it peaks 200rpm earlier. The spec sheet confirms it’ll be faster. But on the open road, is this the ultimate Porsche...or has the magic of the GT3 been lost in the unforgiving hunt for performance?

The badge on its nose might not be as prestigious as those adorning the pairing above, but Honda’s new Civic Type R is undoubtedly one of 2015’s most talked-about cars. Not only is it the most ostentatious production car Honda’s ever made, but it also features the first ever turbocharged VTEC engine. Can the front-driven hatch really transmit all of its 306bhp onto the road to take on the likes of the dynamic Renaultsport Megane? Or is the new Civic Type R all show and no go? Dan Prosser delivers his verdict.

Jethro Bovingdon reckons the Aventador SV perfectly sums up what all Lamborghinis should be like: fast, loud and angry. Though it's based on the standard Aventador, the SV has received such extensive work that it quickly feels like an entirely new car. Bovingdon is understandably sold before he clambers into the driver seat. But with chest-thumping gear changes from its ‘demonic’ drivetrain, and standard fitment of Lamborghini’s dreaded Dynamic Steering, has the SV gone and shot itself in the foot?

And as if that wasn’t enough, Radar is brimming with news, and regular columnists Richard Meaden, Richard Porter and Dario Franchitti return to talk about Ferrari’s future, Apple cars and racing drivers and their millions.