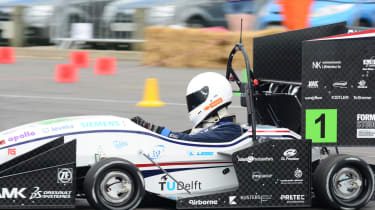 Delft University used its winged electric single-seater to score a total of 909.3 out of 1000 possible points, and was joined by Germany’s UAS Zwickau and Stuttgart University on the podium. The Dutch Uni failed to win any of the event’s eight individual tests, but scored consistently throughout.

The competition, which has been running in its current format since 1998, asks students to design and build a single-seater racing car to be tested across a variety of parameters. Factors like handling and straight-line performance, efficiency, design and manufacturing can be graded to then present an overall score. 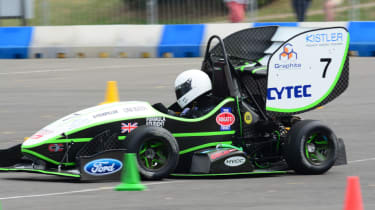 evo joined Oxford Brookes on the first day of the 2015 event to gauge just how serious the competition was. We quickly learned that despite being student built, Formula Student single-seaters are highly complex machines.

‘Formula Student isn’t necessarily racing, it’s an engineering design challenge,’ explained Ralph Dale, Brookes’ PR manager for 2015. ‘To make sure everyone meets the rules, scrutineers measure things like the wheels, suspension and wings to make sure they’re the right height and can take the right loads.’

Not only are the cars built to a high standard, they’re fast too. Oxford Brookes opted to stick with a combustion engine for its 2015 single-seater, sourcing a single-cylinder four-stroke engine from KTM and adding a bore kit to bring size up to 570cc. 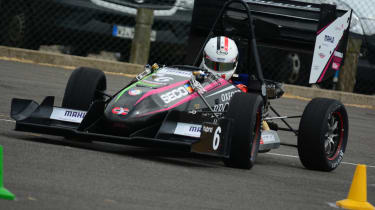 ‘Our car produces around 60bhp and weighs about 170kg, so we’re running with about 350bhp per ton,’ continues Ralph. ‘It takes about 4.2 seconds to reach 60mph. Top speed is gearing limited, but we can reach around 100 here.’

Ralph explains that electric cars are often even faster, with Delft’s racer expected to accelerate from 0-60 in around 2.4sec - faster than even a Formula E racer (which takes around 3sec).

A strong area for Brookes’ racer was in its design – proven by its second place ranking in the design test. The team’s decision to use a monocoque chassis, made up of three layers – an outer aluminium skin, an aluminium honeycomb middle and inner carbon skin – impressed judges with its benefits for weight saving and strength. 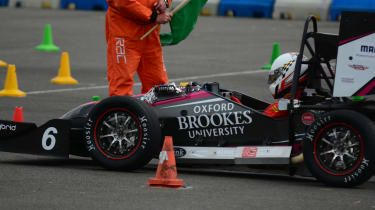 ‘We saved around 15 per cent in weight using carbon on the inside,’ explained Christopher Shawe, Brookes’ lead chassis engineer. ‘We chose this sandwich chassis design, largely due to tolerance. If you weld a tubular chassis, for example, you can have bigger design tolerances so your suspension points could be 5mm out this way or that way. But with this monocoque, our tolerances are just 1mm over the entire chassis.’

One key area that makes Formula Student racers so relevant to modern motorsport is aerodynamics. Since speeds are fairly low for single-seaters, wings are massive and often designed to work the air has hard as possible for maximum effect.

‘We have very aggressive profiles – you can see the front wing main plane is very shallow and flat, and then the two flaps at the rear are very aggressive,’ aerodynamicist Cole Pearson said of the Oxford Brookes car’s front wing. ‘The shallow and flat part allows a large area to run in ground effect, so you see the low pressure for a large surface area. Then we have these flaps at the back to turn the flow, to generate the low base pressure that creates the suction under the wing.’ 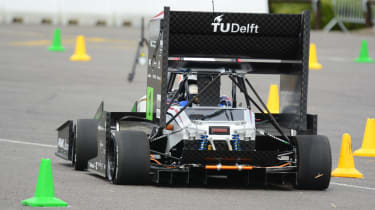 ‘A lot of teams run high downforce elements, but they’re not thinking about their cooling as much,’ added fellow aero expert James Durham. ‘Really our aero work considers both downforce and cooling. But we haven’t just looked at the stuff that’s on the car now, we’ve looked at what other teams have done too. We’ve studied putting a floor on the car, active aerodynamics – to be honest, the development you see on the car right now is only half the story.’

Though Oxford Brookes failed to secure a win in 2015, given its budget – which, along with several other UK unis, is widely acknowledged as being significantly lower than some of the top European universities – the team performed very well. And with several Formula Student graduates landing themselves jobs in top automotive firms and motorsport teams (including Formula 1), an exciting future lies ahead for many of these talented student engineers.