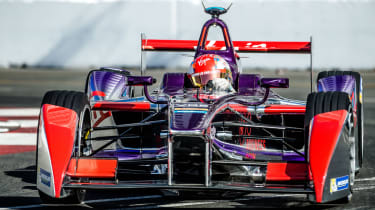 Several of the world’s premiere single-seater championships look set to increase wheel diameters in a bid to make the tyres used for racing more relevant to road cars. Currently, top-tier championships such as F1, GP2 and Formula Renault all run 13-inch wheels, but tyre suppliers believe that using 17 or 18-inch wheels will help their technology transition more effectively into road tyres.

‘From the very start the idea was to have maximum links between our cars and the street tyres of the future,’ explains Serge Grisin, Michelin’s Formula E project manager. ‘So what we learn in racing is much easier to transfer to a street tyre because of the championship’s similarities.’ 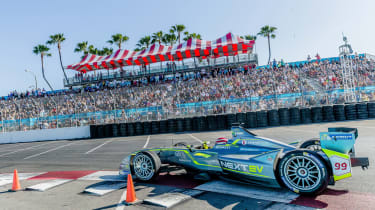 Grisin adds that the process of transferring innovation from motorsport to the road is also made quicker, with the new technology  fast-tracked into production. ‘What we are learning now we can use in the next generation of street tyres.’

It looks like both classes of Formula Renault – FR 3.5 and FR 2.0 – will soon follow suit, as the series has been testing Michelin tyres on 17 and 18-inch wheels. The popular perception is that lower profile rubber helps make handling more precise. GP2 also ran a demonstration car on 18-inch wheels at the 2015 Monaco Grand Prix, and later confirmed that the new Pirelli tyres used on the car were ‘ready to race’. 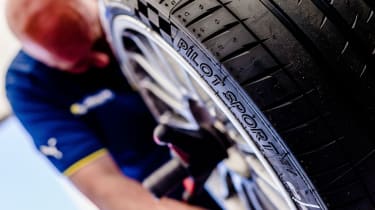 Even so, Formula E tyres will likely be the most relevant to road cars because, unlike races in other classes, the cars can only run treaded tyres and compete on street circuits.

‘The tyres have to race on painted surfaces and over manholes in temperatures ranging from five to 50 degrees; it’s the same for street tyres,’ continues Grisin. ‘So during a race we’re in a context where the way the tyre is working is very similar to a normal road tyre. We can use Formula E as a laboratory.’