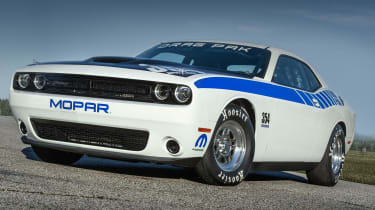 Muscle cars have a reputation for being straight-line monsters rather than corner-carvers.

With the Dodge Challenger Drag Pak from Mopar, the American brand is embracing this attitude by turning the regular Challenger into a vehicle specially designed for the strip.

Actually, Mopar has turned the Challenger into two drag strip-ready vehicles – one with a supercharged 354 cubic inch HEMI V8 (that's 5.8 litres), the other with a larger (but naturally aspirated) 426 cubic inch HEMI (7 litres).

Far more than just an engine package, each Drag Pak car also features several special modifications to prepare it for the strip.

At the front, the cars use new Mopar-designed suspension with adjustable front struts. The back end is even more serious, with four-link suspension, a Panhard bar, beefy axles and a four-inch diameter driveshaft. Adjustable dampers feature here too, as does an anti-roll bar. Wheels are 15-inch diameter front and rear, but those at the rear wear tyres 30 inches in diameter and 9in wide.

A roll cage dominates the interior, though dashboard design remains the same as the production car. A set of Mopar gauges, lightweight seats for both driver and passenger, and a five-point harness all feature.

Other changes are harder to spot, but useful for racers – such as a rear-hinged bonnet rather than the car’s usual front-hinged item, and trailer tie-down loops so drivers can easily secure their car for trips to the strip.