Veyron replacement finally makes an appearance albeit in audio form

Bugatti has released a teaser video for the Veyron's replacement. Somewhat unsurprisingly, it doesn't show any footage of the mystery car whatsoever, but it does let you hear the sound.

Current rumours point to the new Veyron boasting an incredible 1500bhp from an updated version of the 8-litre quad-turbo W16 engine. It's also said that there will be two models, a petrol version and a more powerful hybrid Veyron that will top the performance scale.

At the moment the Veyron replacement's name is still unconfirmed, but the term 'Chiron' has been floated around.

Bugatti is said to be showing the car to a few select customers behind the scenes at Pebble Beach. Those who claim to have seen it say it's a "meaner and sportier" vehicle.

All indications point to us hearing more about the next-gen Veyron in 2016. In the meantime, enjoy the below image of a supposed Chiron test mule taken just outside Los Angeles airport. 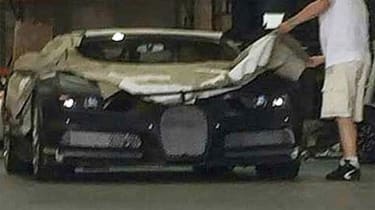