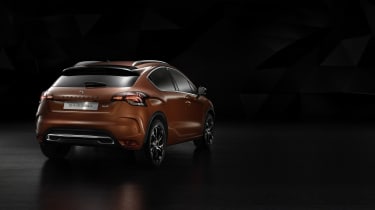 Citroën has unveiled not one but two body styles for its new facelifted DS 4, with a brand new ‘Crossback’ being added to the product range.

The new car is designed to bring the DS 4 up to scratch against the rest of the premium hatchback competition and as such incorporates the likes of LED daytime running lights, Apple CarPlay and Nappa leather interior options.

The front end of the new look DS 4 takes the same ‘LED Vision’ headlamps as those seen on the DS 3 and DS 5. They use a combination of three LED modules alongside a Xenon directional headlamp. Audi-style scrolling indicators have also been added.

As DS is now an entirely separate brand to Citroën, the car features no Citroën badging on its exterior. Instead the front of the car is taken up by a large vertical grille that features a large DS logo.

The Crossback has been put together in order to take on the likes of the BMW X1 and Mercedes-Benz GLA. Unlike other crossovers, the car is simply a lifted version of the standard DS 4, with a 30mm higher ride height, black plastic wheel arch trim and a set of grey roof bars.

Interior tech includes a 7-inch colour touch screen that features Apple’s CarPlay, meaning iPhone users will get one of the best nav systems in the business. A high-end Denon sound system is also available.

Other technology includes an SOS & Assistance system which can locate a vehicle and notify the emergency services in the case of an accident, a virtual manual and a ‘mapping pack’ which will notify the owner via e-mail if the car leaves a set geographical area.

Six engines will be on offer at launch, three petrol and three diesels. The PureTech 130 is the most advanced of the petrol range, offering 55.4 mpg and CO2 emissions of 119g/km while producing 128bhp at 5,500 rpm and 169 lb ft of torque from 1,750 rpm. Gearbox options include a six speed manual or a six speed torque converter automatic.

The most exciting diesel, if there is such a thing, is the ultra-economical BlueHDi 180 which manages 64.2 mpg. The Crossback will be available with two engines from launch - a petrol PureTech 130 and a diesel BlueHDi 120.

Citroën has introduced new colour schemes for the DS 4 in an attempt to make the look and feel of the car more customisable. Nine paint schemes are now available, while the roof and rear spoiler can be specced in a choice of four colours.

Order books for the new look DS4 will open in November, pricing is still TBC.