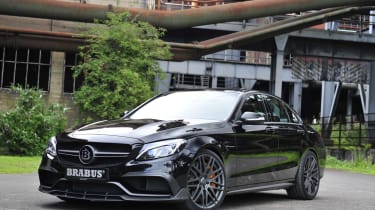 Brabus has raised power in the Mercedes-AMG C63 S up to an impressive 591 bhp via its new PowerXtra B40 kit. The extra 88 bhp comes from an engine remap that adjusts injection and ignition as well as increasing boost pressure in the AMG's 4-litre twin-turbo V8.

Torque figures also increase in the C63 S, with 590 lb ft now on offer, while the 0-60mph time drops down to a supercar-rivalling 3.8 seconds. Top speed is raised to 186 mph.

Other Brabus modifications for the C63 include a new exhaust system designed to reduce backpressure and make the C63's V8 sound even better. Electronically controlled butterfly valves allow for what Brabus calls a 'coming home' mode to keep the exhaust system quiet when needed.

A set of 20-inch Brabus wheels are also on offer. The five-spoke wheels feature carbon inlays and are wrapped in 255/30 at the front and 275/30 tyres at the rear. Options include Pirelli, Continental or Yokohama rubber.

Brabus has also unveiled a set of both exterior and interior visual upgrades for the C63 including clear coated carbon spoilers and a redesigned front bumper. The interior features tailored leather and Alcantara as well as a choice of wood and carbon trim sets.

Brabus will be unveiling the C63 S in the metal at the 2015 Frankfurt motor show. For those interested in seeing the standard C63 S in action, why not watch it go head to head with a BMW M3 in our Deadly Rivals video below.

Or alternatively, you can read our full in-depth review of the C63 here.