Ahead of Texas' WEC round, we look back at the eventful 'Ring race 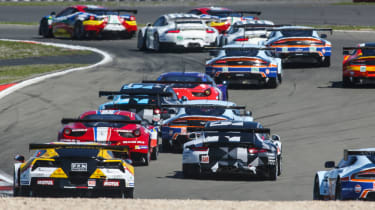 As the WEC circus heads to Texas for the fifth round of the 2015 championship, we look back at the previous race at the Nürburgring. Will we see a repeat result in the US?

Porsche picked up in Germany where it left off in Le Mans 10 weeks earlier to take the top-two stops of the podium at the 6 Hours of Nürburgring. The number 17 car of Timo Bernhard, Mark Webber and Brendon Hartley led the number 18 car of Romain Dumas, Neel Jani and Marc Lieb over the line in Sunday’s race, beating closest rival Audi to grab another maximum points haul.

Let's look back on the eventful six hours that preceded Porsche's dominant result in more detail, and consider what it means for the remainder of the championship. 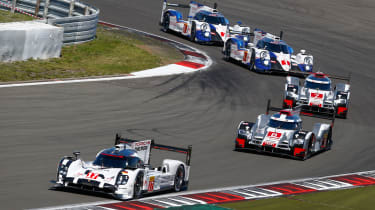 Though the Michelin-shod Porsches had started on the front row for the rolling start (the 18 car led the 17), the team’s race was far from a simple lights-to-flag victory. Constant threat from the two Audi R18 e-tron quattros kept all of the 919 Hybrids’ drivers on their toes, and no fewer than three stop and go penalties meant little rest could be had around the 15.2-mile circuit.

It was the number 7 Audi of Marcel Fassler, André Lotterer and Benoît Treyuler that presented the best threat to Porsche’s charge, stealing second place after a fast pit stop early on. But the pace of the 919 Hybrid was too much, ensuring the Audi was unable to challenge for the lead, falling back into the clutches of the third placed number 17 Porsche.

Webber, who was at car 17’s helm at the time, retook second, and even found himself challenging for the lead as the sister 919’s 40sec lead was diminished after a stop and go penalty for excessive fuel usage. Tension was high as the cars ran nose to tail, but at least Porsche had a strong command on the top-two places.

Or so it thought, because not long after that the 18 car was handed yet another penalty, pushing it back to fourth position. This meant second and third places were now in Audi’s hands. 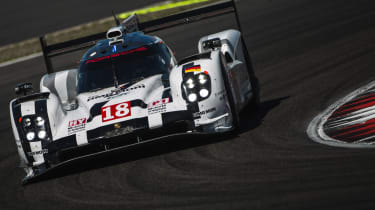 On-the-limit driving from the second 919’s drivers saw it claw its way back into third, and a full course yellow then helped it trawl in the Audi ahead. Fast-forward several fast laps and one stop later, and Jani (who was in the car at the time) found himself just seven seconds behind the second placed Audi, with the other Audi still close behind.

This made for a fantastically close final hour of racing, and it wasn’t until a quicker final stop that the number 18 919 was able to retake second place. The podium positions remained unchanged for the remainder of the race, much to Porsche’s delight.

The Nürburgring was also an overriding success for Porsche and Michelin in the LM GTE Pro class, as the Porsche 911 RSRs also grabbed a one-two finish, crossing the line ahead of AF Corse’s lead Ferrari 458 GTE. 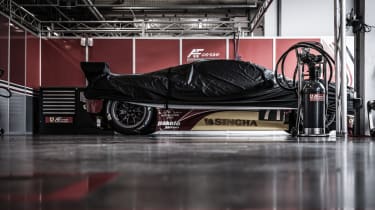 Now we’re halfway through the 2015 WEC season, Porsche has to be happy. Its cars are clearly the outright fastest in the LMP1 category at the moment – all of the class’ racers run Michelin tyres, so its advantages are linked to its powertrain, chassis and drivers.

The WEC circus heads to the Circuit of the Americas for the next round of the 2015 championship on September 19. It was Audi who dominated there last year, but after such dominant performances in the last two rounds, Porsche has to be favourite for this year's race. The championship could go either way.