Are more titles on the agenda for Britain’s star driver? 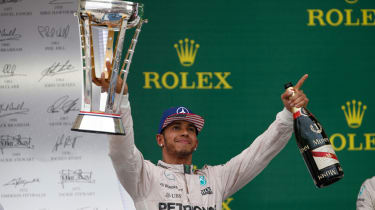 Lewis Hamilton secured his third Formula 1 World Championship title yesterday when he won an action-packed race at the Circuit of the Americas in Texas. The 30-year-old crossed the line 2.8 seconds ahead of fellow Mercedes driver Nico Rosberg, after having resisted onslaught from several drivers including his teammate, Ferrari’s Sebastian Vettel and the two Red Bulls of Daniel Ricciardo and Daniil Kyvat.

Thanks to a set of unique and challenging circumstances – made up of changing circuit conditions and several safety car periods – the race was arguably the most of exciting of year. And the action commenced from the very start, as both Red Bull drivers enjoyed more grip on the damp circuit to battle through to the lead and set the pace early on. But as soon as a dry line started to appear, the Mercedes cars suddenly came alive, with Hamilton charging through to the lead and Rosberg slicing his way back up towards the front – he’d fallen back after clashing with Hamilton on the first corner. 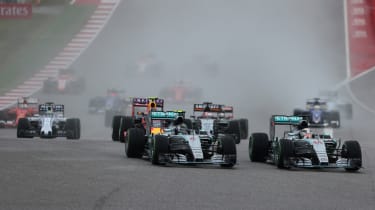 Several race incidents followed, and, thanks to his teammate’s decision to back the Red Bulls up during a virtual safety car period, Rosberg was able to capitalise and eventually found himself back up in second. He even fought his way past Hamilton and appeared to be on his way to his twelfth career win, but seven laps from the end he made an unforced error, sliding off the circuit at turn 15’s exit. The incident handed Hamilton the win and essentially the title.

Behind the race’s protagonists there was plenty of on-track action; the two Toro Rossos of Max Verstappen and Carlos Sainz provided spectators with a significant portion of this entertainment. Sainz fought hard to finish in seventh place, and 18-year-old Verstappen slithered his way through the field and past both Red Bulls (his team’s parent outfit) on his way to fourth place – evidence that his youth provides little disadvantage on track. Even the McLaren-Hondas showed glimpses of some natural pace. Fernando Alonso eventually fell out of the points after suffering a mechanical issue, but McLaren teammate Jenson Button clung on to sixth place – his best result of the season. 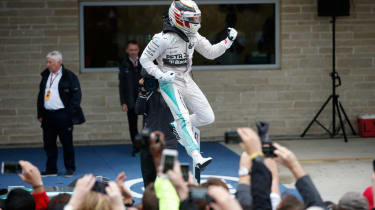 After the race, World Champion Hamilton was unsurprisingly overjoyed, but Rosberg’s heartbreak was clear to see – he expressed frustration ahead of the podium ceremony and then refused to celebrate during the champagne spraying. At least third placed Vettel appeared happy to be the best non-Mercedes finisher.

Hamilton’s 2015 championship win not only makes him the first British driver to win back-to-back titles (he won his second title in 2014, his first in 2008), it also brings his total tally into line with his hero, Ayrton Senna, and Sir Jackie Stewart – Britain’s only other three-time World Champion. Of F1’s current drivers, only four-time champion Vettel has more titles to his name. 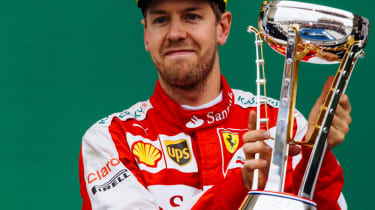 Though there are still three Grand Prix remaining for the 2015 season, thoughts have already turned to 2016 and who will be strongest for the title. Given their dominance this year and the lack of rule changes due for 2016, there’s little reason to believe that Hamilton and Mercedes won’t be favourites for the drivers’ and constructors’ crowns. And Ferrari’s return to form suggests Vettel will continue to be a strong contender. Uncertainty as to who’ll supply Red Bull with its engines – current partner Renault remains the most likely candidate – makes it hard to gauge the team’s potential just yet, but even with these concerns it’d be unwise to write off a team that won four consecutive titles between 2010 and 2013. And who knows, Honda’s freedom to further develop its engine could bring McLaren back into the picture – though you’d have to think that given the team’s current situation, a championship charge is still a season or two away at best.

The F1 circus heads to Mexico next for round 17 of the 2015 championship this weekend. It’s the first time the championship has raced in the country for more than two decades – the last race took place in 1992. With the weight of the championship battle well and truly lifted from his shoulders, Hamilton stands out as favourite for the race win. But Rosberg will undoubtedly be fired up to prove he still has what it takes. Expect a close-fought battle for pride between the two Mercedes drivers.