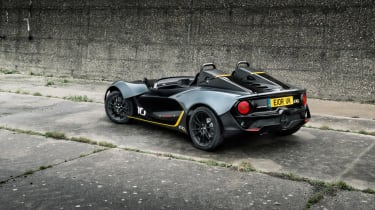 Zenos has released specifications and details of its latest car; the E10 R. Featuring a 350bhp 2.3-litre EcoBoost engine - the same as that found in the latest Focus RS and Mustang - the car promises a power to weight ratio of nearly 500bhp per tonne.

That sort of performance translates to a 0-60mph time of just 3.0 seconds, with a top speed of 155mph. The car is in fact nearly 40 percent more powerful than the E10 S, the car that sits below it in the Zenos range.

The E10 R features a bespoke ECU, a unique three-inch diameter exhaust and a special lightweight flywheel. Other changes include uprated brakes, the lightweight optional seats from the E10 S and lightweight wheels (offering a 10kg weight saving). Also fitted as standard is a six-speed manual gearbox.

That gearbox features revised links to deliver a slicker shift, as well as a bespoke ball rather than the standard Ford one fitted to other cars. It's also 18mm lower than before.

The 2.3-litre EcoBoost turbo engine develops its full 350bhp at 6000rpm, with a 6800rpm redline. Torque consists of 350lb ft at 4000rpm. The E10 R boasts a 700kg dry weight before being specced up into road trim, hence the impressive power to weight ratio.

As standard the car comes without a windscreen, although one can be optioned for £2000. Bilstein dampers, Eibach springs and four-piston Alcon brakes at the front all come with the car.

At launch the E 10 R will be available as a 'drive edition' model, priced at £43,995. That includes £6000 worth of extra kit for £4000 more than the standard £39,995 E10 R. Included with the Drive Edition is a removable steering wheel, carbonfibre seats, adjustable dampers and full six-point harnesses. A unique grey and yellow paint scheme is also used.