New drivers, a new livery and new engines for the newly-formed Renault Sport Formula One Team 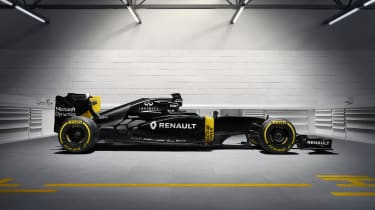 Renault has unveiled its new R.S.16 F1 car and along with it, its all-new driver lineup for the 2016 FIA Formula 1 season.

British GP2 star Jolyon Palmer will join Kevin Magnussen in the Renault Sport Formula One Team, which takes over operations from the old Lotus squad – albeit with some personnel changes and new Infiniti-branded Renault power. The aim is to take podiums within the next three years.

The launch took place at Renault’s Technocentre in Guyancourt, near Paris. There, Renault also revealed its future motorsport activities – including Formula 1 and Formula E, as well as smaller series like the Clio Cup and Renault Sport R.S.01 Trophy – will take place under the Renault Sport Racing banner.

Renault Sport Cars, meanwhile, will cover the development and commercialisation of the firm’s sports road cars. Linking the two under a single Renault Sport division should bring closer links between road and race car development – such as benefits from the development of hybrid and electric technology from F1 and Formula E.

Aside from the driver changes, Renault Sport Formula One has also made some personnel changes in transition from Lotus to Renault. 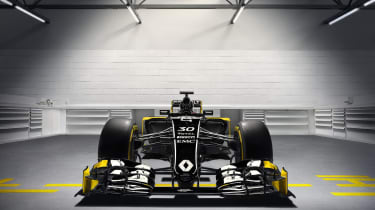 Cyril Abiteboul will head racing operations as a whole. Speaking to evo, Abiteboul confirmed that while the team has made some personnel changes, it’s actually the team’s ethos that will change the most.

‘The working process has to be different,’ he explained, ‘not least because the ambitions and financial resources of a works team are different.’

With big rule changes coming in 2017, Renault’s challenge will be to create motivation and the right working ethos in a team that may not be competitive at first. ‘We should put all our resources into 2017’ Abiteboul said, ‘except what we need to do a reasonable job this year.’

According to Group Renault CEO Carlos Ghosn, the decision to come back to F1 with a factory team was an easy one.  While Renault hasn’t fielded a full team for a few years, it has remained committed to the series with its engines – and now sees F1 as a chance to expand the company’s profile in emerging markets like Africa, India and China, where brand recognition is lower.

And the car itself? This black colour scheme may well be what you see taking to the grid at Melbourne.

Not the most distinctive livery, perhaps, but it looks great in the flesh. And as Abiteboul, Magnussen and Palmer know, it’s what lies beneath that will make the difference over the next few years.