McLaren might be suffering a dry spell in F1, but the team's past successes can still be enjoyed today 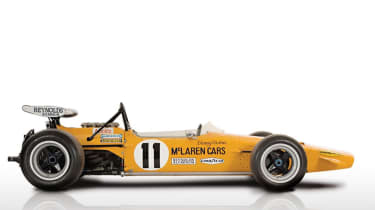 However inconsistent their F1 results, there is always one thing you can be sure of with McLaren’s Grand Prix cars – they’ve always looked absolutely fantastic on track.

Whether resplendent in one of F1’s most iconic liveries, the red and white of Marlboro, in the modern mirrored finish with bright red Vodafone sponsorship or in Bruce McLaren’s original orange, they’re among the most recognisable cars on the grid.

You’ll recognise several in the heritage slider on McLaren’s website. Twenty of the team’s most successful cars are presented in stunning plan view photographs.

The series starts with the first race-winning McLaren, Bruce’s 1968 M7A. The car took three victories that year from 11 races powered – as so many were in those days – by Ford’s dominant 3-litre Cosworth DFV. As a car from the 1968 season, it’s significant aesthetically too, as the first year in which aerodynamic wings became commonplace.

Emerson Fittipaldi’s championship-winning 1974 car is next, and James Hunt’s striking 1976 winner after that. Marlboro colour schemes dominate the next few choices but perhaps most significant is the MP4/4 of 1988. 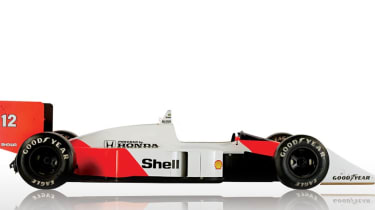 Taking 15 wins from 16 races, it’s the most dominant car in the sport’s history, with Ayrton Senna taking eight of those victories to finish the year ahead of teammate, Alain prost.

The car is probably one of McLaren’s most distinctive too – low, long and wide (1989’s MP4/5 couldn’t look more different), the car developed 900bhp from its 1.5-litre twin-turbocharged Honda V6.

Nigel Mansell won the 1992 title in his Williams FW14B, but the MP4/7 of 1992 was technically significant for McLaren, as its first car with a semi-automatic transmission. It allowed Senna to snatch three victories in a season when Williams dominated, just as McLaren had in the 1980s.

The last two cars shown represent McLaren’s last bite at success in F1 – Lewis Hamilton’s title-winning 2008 car, and the MP4-27 that Hamilton and Jenson Button steered to seven wins in 2012.

It’s hard to tell when McLaren’s next successful spell might arrive, but in the meantime there’s plenty to appreciate from their past successes.