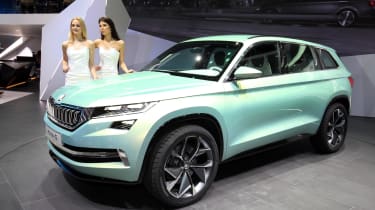 Skoda continued its tradition of releasing a striking concept vehicle at the Geneva motor show with a new SUV study dubbed the VisionS.

It’s a unique proposition for the Czech manufacturer, which doesn’t currently offer a true SUV model in its range, the Yeti serving the role of a compact crossover.

However, like Volkswagen Group cousin SEAT, Skoda can no longer ignore a market that grows bigger every year – particularly given it’s a segment that’s also popular in the Chinese market, where Skoda has a strong presence.

While the VisionS’s proportions suggest a car based largely on SEAT’s new Ateca, its 4.7-metre length is considerably longer than the SEAT’s 4.36m, and it’s wider too at 1.91m (versus 1.84m). The car is, however, based on the ubiquitous MQB modular platform.

Naturally, the Skoda has its own style too, though those already used to Skoda’s design language will find many familiar details, from the strong ‘tornado line’ along the car’s shoulder to the narrow headlights and prominent bonnet ridges. 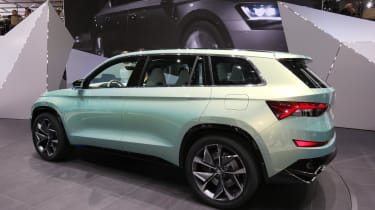 Behind the familiar nose is a compact 1.4-litre TSI petrol engine, developing 154bhp and 184lb ft. It’s joined at the front by an electric motor, providing an additional 54bhp and a healthy 162lb ft of twisting force.

The rear axle has its own electric motor, this time developing 114bhp and 199lb ft – and while working out the car’s peak output isn’t quite as simple as adding everything together, the setup enables a 7.4sec 0-62mph time, as well as a wide choice of driving modes, from all-electric to the power of all three sources working in unison.

The other benefit is fuel efficiency. We’ve long learned to ignore official range and fuel consumption figures and even more so with hybrid vehicles, but the claims here are 31 miles of all-electric range, and combined economy of 149mpg.

Any self-respecting concept vehicle will these days include some form of connectivity and infotainment tech, and the VisionS provides mobile digital networking, with large interior displays and infotainment options for all three rows of passengers.

Follow all the latest Geneva motor show news on our show hub page.