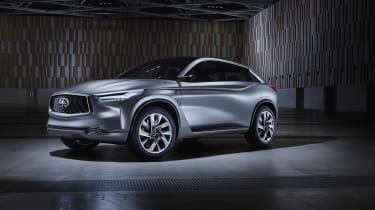 Infiniti has given a clue as to the next evolution of its design language with the QX Sport Inspiration Concept, shown at the Beijing motor show.

Designed to slot into the premium, mid-sized SUV market, the concept’s styling features input from the firm’s design studios in the UK, USA, China and Japan.

Which such a collaboration might typically result in a disjointed mess, the QX Sport Inspiration is possibly one of Infiniti’s better-resolved shapes and looks closer to production-ready than many of its recent concepts.

Less clear than the styling is what might power the car should it move from concept to production, though an engine selection from Infiniti’s current lineup – which includes a 2.2-litre diesel, 2-litre turbocharged petrol four, 3.5-litre petrol hybrid and an upcoming 400bhp turbocharged V6 – is likely. 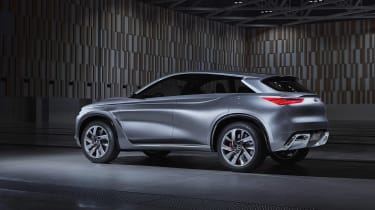 As with lack of information on the engine, other drivetrain and chassis details are nonexistent, highlighting the concept status. Again, any production version is likely to share its underpinnings with an existing model.

The cabin is perhaps less close to production than the exterior, with simple, flowing lines, one-piece seats and some complicated textures to its surfaces. Instruments are entirely digital – with a centrally-mounted infotainment display.

‘The QX Sport Inspiration is a statement of intent from Infiniti,’ explained Infiniti president, Roland Krueger, ‘showcasing a daring design philosophy and a demonstration of our capabilities in the mid-size SUV segment.’

You can catch up with all the other launches from Beijing by heading to our show hub page.