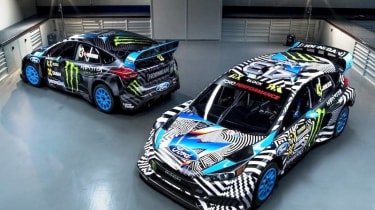 Ford has released the first episode in a video series detailing how it created its 600bhp Ford Focus RS RX for the FIA World Rallycross Championship.

The Focus RS RX uses a 2-litre turbocharged petrol engine with 600bhp. Using a complex permanent four-wheel drive system, the car is capable of sprinting from 0-60mph in no less than 1.9 seconds.

The World Rallycross Championship is actually already underway, with the first stage taking place in Portugal on the 15th of April. The Focus RS RX managed a fifth place piloted by Andreas Bakkerud, while Ken Block put the car in 18th. The next race takes place at Hockenheimring in Germany on the 6th May.

This isn't the first time that Ford has produced a video series showing behind the scenes during a car's development. The road going Focus RS was given similar treatment prior to its launch. For those interested, you can watch the RS development videos here.

>Or alternatively watch our review of the Ford Focus RS here

For those not in the know, World Rallycross is a significant step away from conventional WRC racing. It involves a mix of both rallying and circuit racing, while the RX cars themselves are significantly more powerful than those found in WRC. The FIA only granted Rallycross proper World Championship status back in 2014.

Currently Petter Solberg leads the championship with 29 points, placing first in his Citroen DS3 WRX car in Portugal. Robin Larsson in the Audi A1 follows, while Johan Kristofferson driving a Volkswagen Polo is in third.