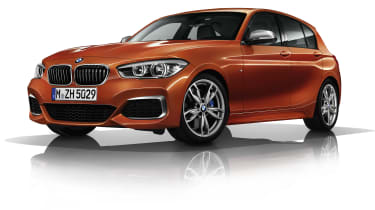 The successor to the impressive M135i and M235i now has more power, more torque and is called the M140i and M240i.

The new engine is still a 3-litre straight six with a twin scroll turbocharger, but now produces 335bhp, an increase of 14bhp. Torque has also risen by 47lb ft to 369lb ft. This means that the power and torque figures are exactly the same as the old, proper, small M car, the 1M Coupe.

The 1M Coupe, even with its proper limited slip differential, reaches 0-62mph in 4.9 seconds. The new M140i with the manual gearbox beats it by reaching 62mph in 4.8 seconds. With the optional 8-speed automatic, it does it 0.2 seconds quicker still at 4.6 seconds. The manual 2 series version goes just as quick as the automatic 1 series, but the automatic M240i accelerates to 62mph from a standstill in just 4.6seconds.

However, if the new model is anything like the old one, even if the automatic is quicker the manual will still be the pick of the range. Even with two fewer ratio’s, the manual offers more involvement and ultimately more fun.

As well as the hardtop versions, there is also an M240i Convertible. As you’d expect it’s also available in both automatic and manual transmission, and either rear-wheel drive or four-wheel drive.