Latest tech could even be useful for driving enthusiasts, as well as future autonomous vehicles 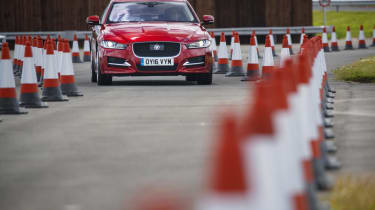 Autonomous vehicle technology might have made headlines for all the wrong reasons recently, but it’s still a form of technology that major manufacturers will be pursuing for some time to come.

Jaguar Land Rover (JLR) is investing heavily in the future of connected and autonomous vehicle technology and has now announced its plans for real-world fleet tests in the UK.

The company will release more than 100 research vehicles onto the roads over the next four years, the first of which will be driven on a special 41-mile test route of motorways and urban streets around the firm’s bases at Coventry and Solihull.

Phase one is to test vehicle-to-vehicle (V2V) and vehicle-to-infrastructure (V2I) technology – both essential factors in future autonomous technology.

V2V involves vehicles on the road communicating electronically with other vehicles around them, allowing both vehicles – and others around those – to build a complete picture of the other’s intentions. 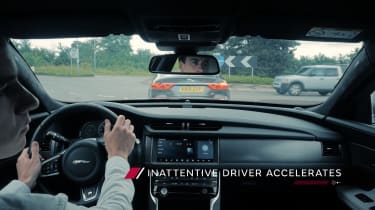 When combined with V2I technology, where vehicles share data with roadside signs, traffic lights, overhead gantries and more, the theory is that vehicles will be able to move around in greater safety and with greater efficiency – both under human control, assisting and warning the driver, and when controlled autonomously.

That would ‘help improve traffic flow, cut congestion and reduce potential for accidents’, according to Tony Harper, head of research at JLR. ‘We will also improve the driving experience, with drivers able to choose how much support and assistance they need.’ In other words, drivers will still have control if they want it, but be able to reduce their stress levels at other times thanks to machine assistance.

Even keen driving enthusiasts could make good use of the technology – Harper sees a future where the car can detect and alert a driver of an obstacle hidden around the next bend on a country road. We have to admit, the thrill of driving would certainly be enhanced knowing there isn’t a cyclist or tractor hiding around the next blind corner.

There are four distinct systems undergoing trials with JLR. They include Roadwork Assist, which helps navigate a smoother, safer path through narrow roadwork zones and contraflow systems.

Safe Pullaway is also being tested, which is designed to reduce low-speed collisions – both in traffic, and also with stationary objects such as garage doors, walls and parked cars.

Over the Horizon Warning is the next project, relying on V2V and V2I communication. This is the one that’ll tell you whether there’s a hazard around the next turn – be that a slow-moving vehicle on a country road or a motorway full of stopped traffic ahead.

Emergency Vehicle Warning is the other significant technology undergoing tests. Its purpose is much simpler – it would allow fire engines, ambulances and police cars to broadcast a signal to others in the area to warn drivers much sooner than a traditional siren would, allowing cars more time to get out of the way.