We take a seat in Mercedes-AMG's thrilling new 576bhp coupe 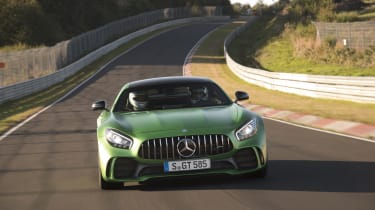 Two laps, and we’re in the wrong seat. But it’s the Nurburgring, in the Mercedes-AMG GT R and the driver’s Thomas Jäger, who races the GT R’s GT3 when he’s not here helping develop AMG’s road cars. He’s done countless laps here, knows every turn, bump, rise and fall in the Nurburgring’s famously tortured tarmac.

So even here, in the passenger seat it should be revealing, if still frustrating. In case you missed it, the GT R is AMG’s take on a more hardcore GT S. Think Carrera S to 911 GT3 RS; so weight loss, aero and tech, for a more hardcore, track-biased AMG experience. 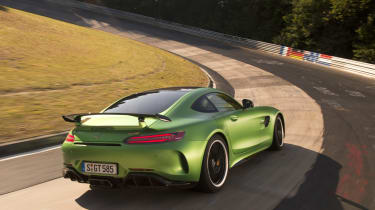 Walking around it the changes are obvious. More prominent wings clothe the wider track, the front wings carbonfibre, the rears aluminium. There’s magnesium holding the structure ahead of the front wheels, the larger, 1952 300SL Carrera Panamericana-aping grille allowing more air to cool the 4.0-litre bi-turbo V8. The oil cooler and intercooler are moved to benefit from the greater air flow through that unique front bumper, venting in the front wings helping with aero balance and brake cooling.

There’s active aero under there, an element dropping 40mm above 80km/h in race mode to create a Venturi underneath reducing front axle lift by 40kg at 250km/h as well as helping channel cooling air around the transaxle. Combined with the double diffuser and the manually adjustable rear wing the aerodynamic changes add 155kg of downforce at the 197mph top speed, it achieving this with a lower drag coefficient than the standard AMG GT.

Unsurprisingly, mass is down, the list reading like a race engineer’s wish list and periodic table of materials. There’s a carbon fibre torque tube that’s 40% lighter than the standard aluminium one, titanium exhaust, forged aluminium wishbones, steering knuckles and hub carriers on the front and rear axles, the lower wishbones on the rear axle featuring uniball spherical bearings rather than bushed connectors for finer control. 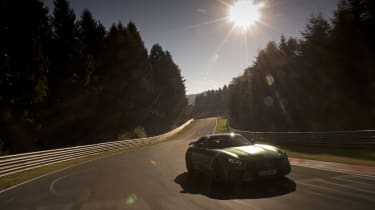 The wheels, 20-inches are forged alloys, helping reduce the unsprung mass, as does the optional fitment of carbon ceramic discs. Coil-over suspension allows manual adjustment of the spring loading, the dampers retaining AMG Ride Control with familiar Comfort, Sport and Sport Plus modes. The rear axle features rear-wheel steering, Dr Frank Emhardt, Senior Manager Vehicle Development AMG GT Model Range, pointing to it, as well as elements like the active front aero and rear chassis bracing that have limited the weight reduction to just 15kg overall. The advantages they bring offset the mass they add, Jäger admitting he’d love the rear-wheel steer and AMG Ride Control in his AMG GT3 racing car such are the benefits to stability.

Frustration at being sat alongside the driving seat rather than in it is sated by watching Jäger at work, in a car he developed on a track he knows intimately. He’s got the 9 mode variable traction control set to mid-way, any more slip he says robs him of time, it working in conjunction with the electronically controlled limited slip differential and ESC, when it’s on... 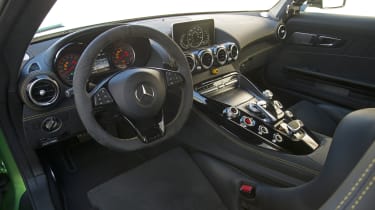 What’s immediately obvious is the effect of that rear-wheel steering, the GT R’s front axle’s turn in quick and incisive, helped in no small measure by the aero, too. It’s massively stable at high speeds, Jäger saying it’s the best road car he’s driven here. He would say that of course, but having recently driven the GT S back in the UK the changes the GT R bring to the mix are very obvious. Not least the sound, that charismatic 4.0-litre V8 biturbo wailing with more gutteral intent through its freer-breathing titanium exhaust. It revs with greater urgency thanks both to a lighter flywheel and revised turbos with enhanced internals and greater boost pressure, is mated to an enhanced DCT AMG Speedshift automatic transmission, which like the engine is situated on active mounts.

The net is 576bhp at a heady 6,250rpm, torque quoted at 516lb.ft, 73bhp and 36lb.ft increases respectively, the GT R monstering around the Nurburgring, flattening its ascents with its plentiful power, the suspension shrugging off even Jäger’s committed entry and exit into the carousel. The traction out of it is genuinely impressive given the difficult forces acting on it as it crests the rise out and hammers down the following straight. 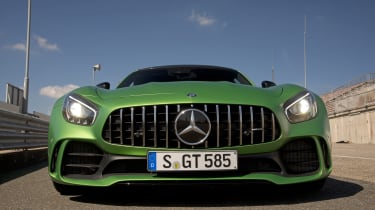 The brakes are mighty, the forces high ebough some multi-point harnesses would be a beneficial. Jäger is busy at the wheel, but he admits, like the AMG racing cars (SLS GT3 and AMG GT) he was also instrumental in developing, it shouldn’t require racing driver as your listed occupation to be able to really enjoy it. It feels massively quick in his hands, quicker even than my last hot passenger lap around here with a certain Mr W Rohrl in a 911 GT2 RS. Job done then, but it’ll take a drive to really just what AMG has achieved, though on this evidence the twin tests with the GT3 RS are going to be pretty epic.