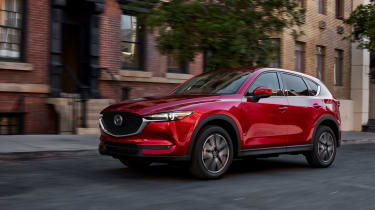 Mazda has shown an all new CX-5 at the Los Angeles motor show. The CX-5 is currently Mazda’s best selling model in Europe, this new version follows the same principles as its successful predecessor but with sharper looks and improved refinement.

Mazda’s new compact SUV shares the proportions to the old CX-5, but with far more extravagant styling. The new CX-5 has design elements similar to Mazda’s RX-Vision concept that was shown at the Tokyo motor show. Admittedly, the CX-5 isn’t as elegant as the coupe concept but it’s a handsome car nevertheless. 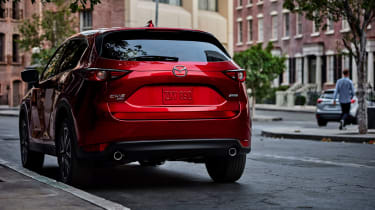 Mazda’s new CX-5 will be available with a choice of two petrol engines and one diesel. Both of the petrol motors are from Mazda’s Skyactiv-G family of engines. The two four-cylinder petrol engines are naturally aspirated, they use an extremely high compression ratio of 14:1 instead of turbocharging to achieve both respectable power and fuel economy. The CX-5 will be available with either a 2 or 2.5-litre petrol engines. The smaller petrol engine produced 163bhp in the old CX-5, while the 2.5-litre 189bhp. The diesel alternative is a 2.2-litre turbocharged four-cylinder which produced 148bhp in the previous model. We expect the engines to produce the same, or similar, amounts of power in the new CX-5.

The new CX-5 has been designed with a focus on refinement and ride comfort, but driver enjoyment hasn’t been totally forgotten. The CX-5 will feature Mazda’s G-Vectoring Control, a system that subtly uses the front brakes to shift weight forward to improve the car’s turn-in ability. It will also have a head-up display.

The CX-5 is also a canvas to display Mazda’s new colour and painting processes. Soul Red Crystal is a new deeper more radiant red than its old Soul Red. The new paint is also applied in three coats in a process that Mazda calls ‘Takuminuri’ and says it can replicate the quality finish of hand painting but in a mass production environment.