UPDATED: We talk to the man responsible for Porsche's new mid-engined 911 race car 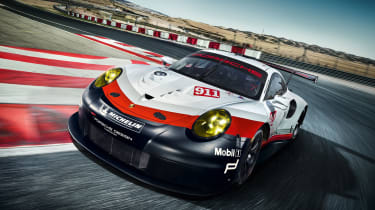 Porsche has revealed its new 911 RSR race car, but unlike almost every 911 to date the new GT racer has the engine in front of the rear axle. The new car has been designed to compete under LM-GTE rules and will be racing against other mid-engined cars like the Ferrari 488 GTE and Ford GT race car.

Unlike the Ford GT and Ferrari 488, however, the 911 RSR is not turbocharged. Instead it’s powered by new four-litre water-cooled flat-six. The old RSR continued to use the illustrious Mezger engine, but with the 911 Cup and R powered by a more modern unit, Porsche took the decision to have a uniformed engine structure. The new engine also gets the direct injection and with LM-GTE rules designed to allow both turbocharged and atmospheric engines air to the engine is restricted to allow a level playing field. Depending on the size of the restrictor used the RSR’s engine can produce up to 503bhp.

The new flat-six does without any variable valve timing, as low-down drivability isn’t important in a race car, and this also simplifies the valve train improving reliability, necessary for long distance races like Le Mans 24 Hours.

Power is sent to the 13-inch rear wheels through a six-speed transmission and mechanical LSD that’s housed in a magnesium case. The gearbox is operated via paddles mounted to the steering wheel.

The lack of engine behind the rear axle has allowed space for a huge diffuser and the new rear wing is claimed to develop LMP1 levels of downforce. Despite the huge aerodynamic add-ons, and not having an engine slung out over the rear axle, the 911 RSR still retains the distinct profile of a 911

The RSR shares very little with a production 911 and has double wishbone front suspension all round rather than the production car’s MacPherson strut front suspenson and multi-link rear axle.

Porsche has improved the safety of the RSR by fitting its new racer with a radar collision warning system. The system is designed to warn drivers of when faster LMP1 and LMP2 car are approaching allowing them to react accordingly. A new roll cage and a rigidly mounted seat also improve safety, this latter development also allows the pedals to be moved to suit the driver.

Because of RSR’s new mid-rear engined layout it could be argued that it isn’t a ‘proper’ 911 anymore. But the new 911 RSR isn’t the first mid-engined 911, in the late 90s Porsche made the incredibly successful 911 GT1 that took an overall victory at Le Mans in 1998. GT1 regulations at the time required 25 road cars to be made, sadly that isn’t the case for the LM-GTE rules as we’d love to see a road going 911 RSR.

Want to know more about Porsche’s new mid-engined 911 RSR? We spoke to the man behind it, Dr Frank-Steffen Walliser, Vice President of Motorsport at Porsche AG. 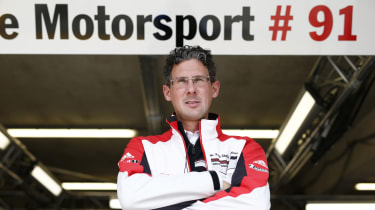 evo: Why did you move the RSR’s engine forward of the rear axle?

Dr. Frank-Steffen Walliser: You need to look closely at the technical regulations and ask: how do you win the championship? That is always the biggest target. If you look at the World Endurance Championship it’s a lot about tyres, especially next year when we will have one set of tyres less per race. We saw that, to use the tyre properly we needed a different weight distribution. If you change the weight distribution [by moving the engine forwards] you also get more freedom with the rear diffuser.

evo: Do you consider it a mid-engined car?

FSW: I’m not allowed to say it is mid-engined, but if you write it I will say it is very precise!

evo: How has the engine move affected weight distribution?

evo: Is there a new regulation for 2017 that permits you to move the engine? Have you had a waiver from the FIA?

evo: How much resistance was there within Porsche to moving the engine forwards?

FSW: Not a lot. We had some serious discussions, but at the end of the day it was simple. What do we want: to have the right performance or to do the same as we’ve always done? It was very clear – we want a successful race car. We had some discussions inside the company whether this is allowed or not for the 911! But we did it – this is a 911, nobody will say it’s not a 911.

evo: How does the new car compare to the old one?

FSW: The old car had some big advantages – in the wet it was very good, it was tremendously good under braking. This car is not so superior in the wet like the old car, but most races are in dry conditions. The old RSR was either undriveable or unbeatable – it was never in between. In 2015 it was on the unbeatable side. In 2016, because of the different tyres w had to use, it was mainly on the undriveable side.

evo: The car had covered 35,000km in testing. How have the drivers found it?

FSW: For one year the drivers complained heavily about the car – but at one of the final tests I got really enthusiastic feedback from the drivers, saying now we are there. The feedback was really good. All the bits and pieces have come together.

evo: Is this new mid-engined car a response to Ford coming in with the GT and winning at Le Mans?

FSW: No. The decision was made way earlier. Ford made a carbonfibre prototype, delivered [road] cars after it won Le Mans…this is not our business. For me the GT spirit looks different. They did a wonderful car, don’t get me wrong, but it stretched a little bit the rules.

FSW: There are no plans at the moment. There have been no discussions yet.