Resistance could well be futile against Mercedes-AMG Petronas' 2017 entry 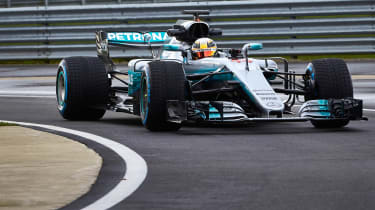 The trophy cabinet has been looking pretty full at Mercedes-AMG Petronas over the last few years. Despite a significant shake up of the technical regulations to try and even up the field, the Silver Arrows look to maintain their momentum in the New Year with the team’s W08 entry for 2017. Now Mercedes-AMG Petronas has revealed the car in full for the first time ahead of the beginning of the F1 season in March, at a special launch event at the Silverstone race track.

Centred on an enlarged floor and wider tyres, the 2017 changes don’t address the powertrain advantage Mercedes-AMG has carried through over the last few seasons. As such this W08 car could continue to lead the pack on engine power and efficiency, although how each car reacts to the new aero and mechanical grip levels will be an interesting variable. We’re looking forward to seeing how the changes impact the racing when the season kicks off.

>Click here for our preview of the 2017 F1 season here 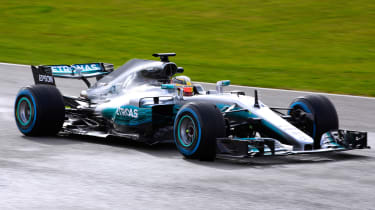 In an aggressive move from the Brackley based team, Mercedes-AMG confirmed that it has continued to refine and improve its powertrain far beyond last year’s package. This should strike a good amount of fear in rivals, especially as Renault has been on the record saying its troubled engines have only just met the performance of last year’s Ferrari units.

The car itself continues to tread the same aesthetic line as its predecessor having a slimmer and arguably more attractive nose than some rivals – especially compared to the likes of the Force India car. Mercedes-AMG says the W08 should be harbouring another slight upgrade come the first round in the form of a bigger shark fin.

A new car is nothing without drivers, though and with new driver Valtteri Bottas replacing last years retiring World Champion Nico Rosberg, Lewis Hamilton will have a lot to deal with - not just the regulation changes, but a new force within the Mercedes-AMG Petronas team.