Launched (quite literally) in spectacular fashion, the E-Pace is Jaguar’s entry into the competitive compact SUV sector 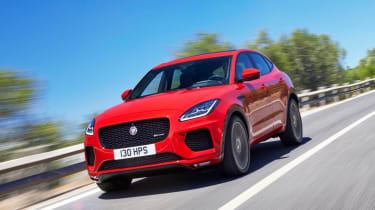 Jaguar’s relentless product expansion will continue with a new, compact SUV called E-Pace. Situated below the current World Car of the Year, the F-Pace, in Jaguar’s range E-Pace will mirror its larger sibling and straddle market segments, sitting between Audi’s Q3 and larger Audi Q5 in terms of footprint. The E-Pace is Jaguar’s third SUV, after the aforementioned F-Pace and the I-Pace electric vehicle concept, which will go on sale in 2018.

Revealed at London’s EcXel centre, in typical Jaguar style the E-Pace showed off its lightweight body with a pretty impressive stunt. In an attempt to one-up the larger F-Pace’s loop-the-loop reveal, the E-Pace had a rather more horizontal task - performing a barrel roll, and breaking the a record in the process - the Guinness World Record for ‘Furthest Barrel Roll’. 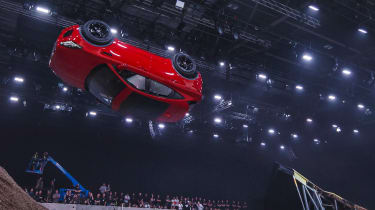 The E-Pace will be offered with a range of 2.0-litre, four-cylinder petrol and diesel Ingenium engines with power outputs from a 148bhp diesel to a 296bhp petrol with a torque spread between 269 to 369lb ft of depending on the engine’s power output. The 148bhp and 158bhp diesel engines are available with a six-speed manual gearbox, with a ZF nine-speed automatic available across the rest of the range.

Taking Land Rover’s D8 platform, which also underpins the Discovery Sport and Evoque, and before that the Freelander, Jaguar has cherry picked the chassis and platform components it requires to compete in this sector. There are MacPherson struts at the front and an integral link for the rear suspension, with the latest active dynamics available on selected models allowing the driver to select different throttle and chassis settings depending on conditions. Torque vectoring will also be available on some E Pace models depending on which engine you opt for. 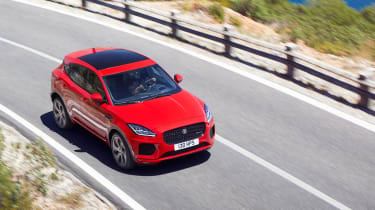 A configurable and adaptive dynamic packages will also be offered across the E Pace model line. Four settings are offered: Normal, Dynamic - this can, depending on the car’s specification, switch steering, throttle, the driveline, gearshift speeds, stability control and torque vectoring settings; Eco and a Rain, Ice and Snow. Jaguar will also offer what it call All Surface Progress Control, a low-speed cruise control system that can control the car’s speed when on low friction surfaces.

Two trim levels will be offered at the car’s launch: E Pace and E Pace R Dynamic with S, SE and HSE specification packs available. A First Edition models will also be offered, but will only be available with the 246bhp diesel or 296bhp petrol engines and on sale for the car’s first year of production.

Jaguar produced 150 E-Pace prototypes for the testing procedure required for its third SUV (the F Pace and forthcoming I Pace complete the pride), which includes extensive hot and cold-weather testing - in temperatures as hot as 48 degrees C, and as low as minus 48 degrees. It's also been altitude tested at up to 5000 feet above sea level. Jaguar says that the total testing programme has encompassed over 120,000 hours, with 500 engineers working on the car to ensure it fulfils its brief. 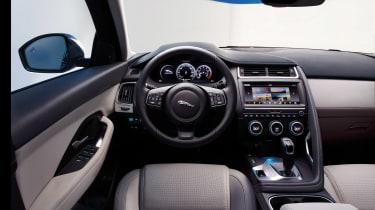 During the testing, the engineers also drove the car into a wading pool filled with water to the depth of 0.5m. They turned the engine off, opened the doors, and promptly went for lunch, leaving the car for an hour, before starting it up and driving it back off afterwards.

Of interest from an evo perspective is a serious amount of track time included in the testing. Jaguar says the E-Pace prototypes have completed 'more than 400' laps of the Nurburgring. Interestingly, Jaguar calls the E-Pace a 'compact performance SUV' in the latest release. Perhaps we'll see a warmed-up 'S' version sooner rather than later...

When it comes to design the new E-Pace mimics the design path led by the sportier F-Type with swept back headlights and a very similar shape to the window line. This is in contrast to the more imperial, upright stance of the larger F-Pace and treads that line of looking in line with its siblings while starting to define an aesthetic all of its own. A range of wheel from 17 to 21-inch in diameter will be available. 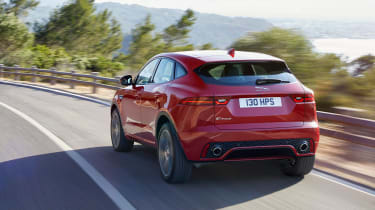 Inside we expect the E-Pace to draw inspiration from the F-Type sports car, losing the rotary dial gear selector and replacing it with the joystick unit as well as having an asymmetrical dash layout.

Hoping to build on the phenomenal success Jaguar has enjoyed with F-Pace, the E-Pace will differ in a few crucial ways. The big news is a switch from the F-Pace’s aluminium-intensive platform to one loosely shared with the Range Rover Evoque. As such, the Jaguar will share its four-cylinder-only status with the Evoque, exclusively using Jaguar’s latest range of single and twin-turbocharged Ingenium petrol and diesel engines.

The Land Rover derived platform has resulted in the transversely mounted engines, The E-Pace will be the first Jaguar to be manufactured outside of the UK, instead being built by Magna-Steyr in Austria due to the British facilities being at capacity. Jaguar will also build the E Pace in China when the model goes on sale there.

Starting at £28,500, the E-Pace will be priced only just above that of the Audi Q3 and BMW X1 but over £2000 less than its Evoque cousin. If the success of the F Pace is anything to go by we, and Jaguar expect the E Pace to be the company’s biggest selling model, marking Jaguar out as an SUV manufacturer with a sideline in sports saloons and coupes.