Jaguar's smallest SUV is sure to sell well, but those buyers will not be getting a class-leading vehicle 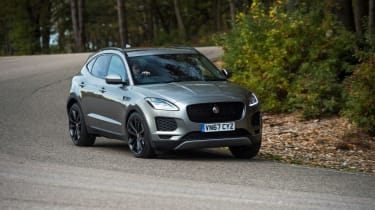 One SUV just isn’t enough for a carmaker these days - a full range must be produced to satisfy customers at all levels in the market.

No matter that Jaguar Land Rover already has a full lineup of SUVs on offer through the Land Rover brand itself, because Jaguar wants a slice of that growing pie too - and following the quick-selling F-Pace (63,519 units in 2016, 43 per cent of the brand’s sales last year) it’s launched the smaller E-Pace.

Pigeonholing the new Jag is tough, it falling somewhere between rival vehicles like the Mercedes-Benz GLA and GLC or the BMW X1 and X3 in size, but Jaguar design director Ian Callum has turned out another handsome shape sure to attract a few more customers from other luxury brands. Will they find a Jaguar driving experience when they get there?

The E-Pace range comprises a selection of four-cylinder Ingenium petrols and diesels at launch, with power outputs ranging between an entry-level D150 diesel developing 148bhp, and the top-end P300 petrol driven here, whose 296bhp unit is a direct carry-over from the F-type four-cylinder.

It makes its peak output at 5500rpm and 295lb ft of torque is delivered between 1500-4500rpm. That’s good for a 0-60mph run of 5.9 seconds - only a couple of tenths shy of the F-type - and a 151mph top speed, all eased through a nine-speed automatic transmission. All but the entry-level diesel send their power to all four wheels, and the D150 has to deliver its output not to the rear pair but those at the front. 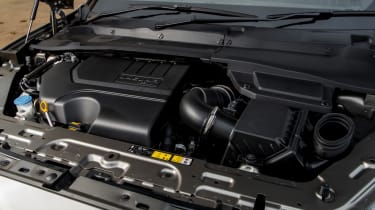 The E-Pace’s basic underpinnings are similar to those of the Range Rover Evoque, albeit tweaked for more agility. The front subframe has a more rigid design, suspension components are formed from aluminium, and the rear axle is designed around Jaguar’s take on a multi-link setup, known as Integral Link.

Drive is primarily sent to the front wheels in AWD models, disconnecting drive to the rear wheels for improved economy, but Jaguar says the system can send up to 100 per cent of the engine’s torque to the rear wheels alone in ‘extreme circumstances’. The E-Pace also features torque vectoring by braking

We tested the P300 in HSE spec, sitting right at the top of the E-Pace range and sitting pretty on 20-inch alloy wheels. From the outside at least, the vibe is just right - there’s a surprising amount of clearance between the wheels and the arches but otherwise it’s among the better-looking cars of this type.

It’s attractively styled inside too, looking not unlike an F-type cabin, but while it has the same vibe from its driver-focused layout, three-spoke steering wheel and upright gear selector, a closer look reveals unimpressive materials and a little less attention to detail. It’s all too easy to find shiny, cheap-looking plastics (the use of aluminium-effect trim is unconvincing in an otherwise uniformally black cabin) and the leather used on the steering wheel doesn’t feel much like real hide.

There’s plenty of space at least and a comfortable, well-adjustable driving position. Thanks to scalloped-out driver and passenger seats there’s ample room in the rear too, so the E-Pace’s relatively compact size (under 4.4m long) shouldn’t preclude it from being useful in family life.

Unfortunately, the Ingenium four-cylinder petrol is as incongruous here as it is in other applications in the JLR lineup. While the F-type just about gets away with it thanks to a deep and fruity exhaust note masking an almost absence of engine noise, there’s no such luck for the E-Pace, which reverts to the same flat delivery and tuneless drone you get in any other car with this engine. 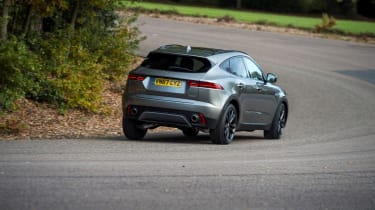 Outright performance feels adequate, throttle response is snappy (best in Dynamic mode) and the nine-speed transmission usefully smooth in auto or manual modes (though there are no paddles to pull, so manual changes must be enacted in Sport mode with the lever), but otherwise the sound, refinement and characteristics of the engine would barely be acceptable in a non-premium vehicle, let alone one wearing a Jaguar badge.

The chassis is a better effort. Jaguar is finally getting to grips with electric power assistance for its steering, and the E-Pace continues that trend with keen initial responses to your inputs, and a fairly strong self-centring effect that gives you some weight to work against as you begin to turn into a corner. When you do, you’ll find good grip and a chassis that feels agile and nicely balanced, working its rear tyres as hard as its fronts, at which point the steering begins to filter back useful messages to your palms. There's body roll, but it's not excessive for a car of this type.

> Jaguar F-type four-cylinder review - can the new 'four cut it?

What's missing is any real sense of fun. Ultimately the E-Pace shows its family-car intentions by scrubbing into safe understeer, and lifting the throttle with the steering loaded up results in a nose-tuck and no more. You can occasionally feel the driveline sending power rearwards and the torque-vectoring brakes nibbling away to keep your line tight, and the brakes themselves are strong if not endowed with much feel - though wisps of smoke after our cornering shots gave away just how hard they were being worked in this 1819kg car.

The ride is acceptable, even on 20-inch wheels and 45-profile tyres, but not overly impressive by the standards of the class, nor by the standards of other Jaguars, thumping through larger imperfections in the road and never truly settling on well-worn tarmac. 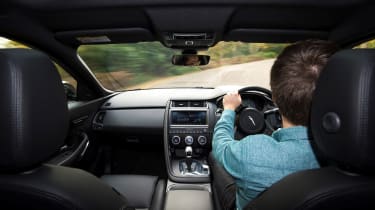 Our P300 HSE test car came in at £48,410. That’s strong money - the larger Alfa Romeo Stelvio in range-topping 276bhp Milano trim undercuts it by £3k, and a Porsche Macan S clocks in at £47,287 - while offering a vastly better 335bhp V6 engine, more engaging chassis and higher levels of quality. The Alfa can’t match the Jaguar’s levels of build, but you get a bigger car for your money and more fun there too.

The E-Pace range starts at £28,500 and while the front-drive diesel that results is even less likely to get your pulse going than the P300, the price is at least easier to swallow.

Jaguar has played it safe with the E-Pace. The engine and interior feel are below average, the comfort and handling slightly above. The lack of distinction is understandable, given it will almost certainly become the brand’s biggest seller and therefore needs to appeal to most of the people most of the time, but Jaguar has developed a fairly unremarkable car as a result.