Alpina’s sleek 3 and 4 Series based models are surely keeping M Division engineers looking over their shoulders. 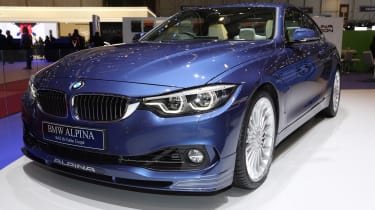 Alpina has launched an upgraded B3 and B4 at the Geneva Motor Show next week. The German tuning company now offers more power, torque and offering optional all-wheel drive, plus a new 'S' suffix - turning them into the B3S and B4S.

Available in saloon, estate, coupe and convertible body styles, all versions now produce 433bhp via a twin-turbocharged 3-litre straight-six engine. That represents a 29bhp jump over the previous model, and beats a standard M3 by 8bhp (although the Competition package counters that with 450bhp).

>Read our review of the BMW M4 Competition Package 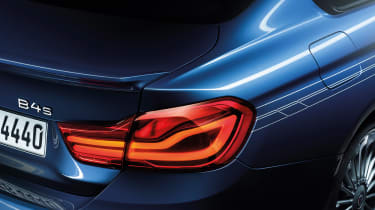 A bigger discrepancy lies in the torque figure however, where the Alpina cars produce a massive 487lb ft compared to the M3's 405lb ft. Both new Alpinas drop the dual-clutch DCT gearbox for the smoother ZF 8-speed torque converter automatic.

Performance times are impressive, with the rear drive saloons sprinting to 62mph in just 4.3 seconds, and xDrive models dropping that time to 4 seconds dead. Thanks to the removal of the 155mph speed limiter, all models will brush a 190mph top speed.

Despite these figures, the softer Alpina suspension set up implies a calmer disposition when compared to the M3, appealing to those after a more subtle high performance 3 Series. Alpina is also offering all-wheel drive for the first time on the saloon and coupe (only estate models were available with xDrive previously) while standard adaptive dampers should keep the ride settled, even on those massive 20-inch wheels. 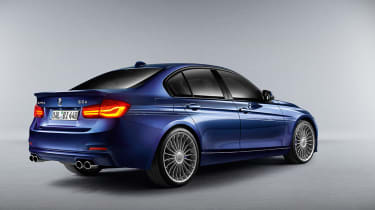 The rest of the updates are all carried over from the updated 3 and 4 Series, meaning new LED lighting front and rear, updated i-Drive system and other subtle refinements under the skin.

On sale later this year, we expect the ‘S’ variants to hold a slight price premium over the now discontinued standard B3 starting at around £60,000 for a rear drive saloon B3S.