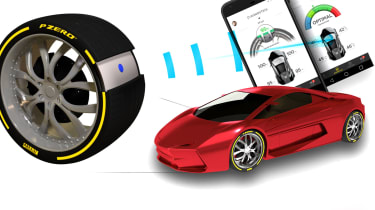 There are many exceptional things about Ferrari’s FXX K – its 1021bhp output, its naturally aspirated V12, its KERS system – but one thing that didn’t make many of the headlines were its intelligent tyres. Buried within each of the FXX K’s slick Pirelli P Zero tyres was a sensor that transmitted relevant information to the car’s on-board computers so it could utilise every possible ounce of grip.

Pirelli has now taken this technology and created a range of replacement tyres for road cars that instantly transmit data on the tyres’ condition to an app on your smart phone. The new Connesso system is available on all of Pirelli’s top of the range P Zero tyres.

The sensors in each tyre connect to your phone via Bluetooth, and it only weighs a few grams so doesn’t affect the tyres’ performance or reduce its speed rating. Pirelli say that it will also last the entire life of the tyre.

The Connesso system allows you to monitor your tyres’ temperature, pressure, wear and tread depth, static load and the distance each tyre has covered, through the accompanying app. The information is instantly transmitted to the app and even allows you to use your phone as a pressure gauge when you top up the air in your tyres. With such instant readings the app could prove incredibly useful on a track day, allowing you to make sure you don’t overheat a tyre, or keep tyre pressures at a reasonable level as heat increases.

The app, as well as alerting the driver if the pressure becomes too low, will also make suggestions about how long a tyre might last and whether it is suitable for the weather conditions. Once a tyre is getting close to the end of its life the Connesso app will allow you to order a replacement directly through the interface and organise the time and location for the fitting.

Pirelli’s intelligent Connesso system is set to grow and is likely to be integrated with OEM systems very soon. Once tied to a car’s brain, the information the new tyres will be able to offer won’t just be used to alert the driver but it could inform traction and stability control systems with instant data on the tyres’ grip, slip angle and whether it’s aquaplaning or not. Pirelli already supply tyres with these abilities to allow manufactures to not only develop tyres for their cars but also to help inform them when fine-tuning a car’s chassis and drivetrain.

Pirelli’s Connesso system might not be fully integrated with cars quite yet, but tyres that will communicate with the app will be ready to be fitted by summer this year. 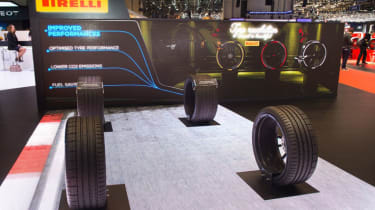 Pirelli has also unveiled another new innovation, though this one won’t be quite as useful when understanding your tyres or on a track day. You can now choose to have the sidewall of your P Zero tyres embellished with a coloured stripe. Four standard colours (red, yellow, white and silver) are available and these can be chosen without any added waiting time over standard tyres. However, you can also choose any colour from the Pantone range – over 3000 different shades – if you don’t mind waiting a couple of weeks.

Rather than looking like an old white-wall tyre, the coloured stripe on of the sidewall is inspired by the design found on Pirelli’s F1 tyres. The colours, however, don’t denote the compound or performance, like stripes on the race tyres do; all of the colours are available on any tyre and serve no function other than decoration. 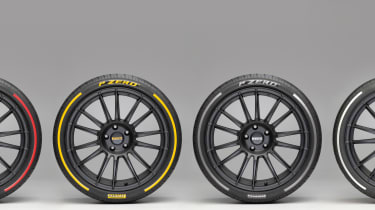