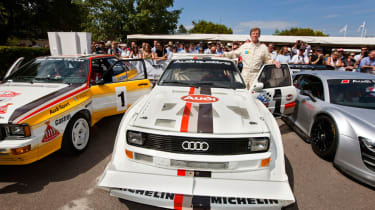 Let’s be honest, when it comes to Audi’s older machines, it’s the Group B rally cars that we remember. Whether it’s an early Quattro with its soft warble from its five-cylinder engine or a flame spitting short wheelbase rally spec S1, Audi’s rally cars have made an indelible mark on the minds of most car enthusiasts.

But Audi and the manufacturers it eventually merged with have a vast and varied selection of historic motorsport vehicles that it will be displaying at events throughout Europe this year to remind us its about more than just four-wheel drive rally cars.

Firstly, Audi’s stand at this year’s Techno Classica in Essen, Germany will be dedicated to NSU – the brand that formed with Auto Union to make Audi as we know it today. Only cars from NSU will be on display, including the rotary engined Ro80 that has been included to celebrate 50 years since it was first launched. As well as the innovative saloon, some of NSU’s smaller cars will be there too, a Prinz 30 and its coupe alternative, the Sport Prinz will make an appearance. So too will a 1000 TTS from 1970, NSU’s rear engine sporty two-door. The huge indoor classic show takes place from April 5th to 9th.

Audi will also enter a host of NSUs into the Danube Classic, which takes place near Audi’s headquarters in Ingolstadt from 22nd to 24th June, and the Heidelberg Historic in July. 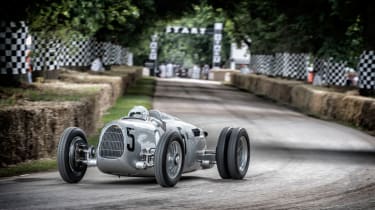 Audi will be rolling out a car from the other wing of its heritage too, an Auto Union Type C racing car. The car was a successful Grand Prix racer in the 1930s, with its 513bhp V16 it dominated European races, particularly the popular mountain races. This year Audi will campaign the 1936 Type C in the historic Großglockner Grand Prix on September 21st to 24th.

> Learn about the history behind Germany's most iconic circuit, the Nürburgring

It will be driven by Formula 1 and touring car driver, Hans-Joachim Stuck, who raced an Audi in DTM during the early 1990s. Stuck will be following in the footsteps of his father, Hans Stuck, who was a successful driver for Auto Union in the Type C. Hans Stuck was especially adept at the mountain races, just like the Großglockner Grand Prix, and was given the nickname The Mountain King.

The Type C will also be driven at Classic Days at Castle Dyck – Germany’s equivelant to the Goodwood Festival of Speed – from August 4th to 6th, where it will be joined by a static display of an Audi Type C ‘Alpine Victor’ from 1919.

Don’t fear though, Audi hasn’t forgotten the Quattro. It will bring the Audi Sport Quattro that broke the Pikes Peak record in 1987 to this year’s Goodwood Festival of Speed on the June 29th to July 1st. The car will be driven up the hill at Goodwood house by the driver who originally took the car to victory up the much larger Rocky Mountain hillclimb, Walter Röhl.