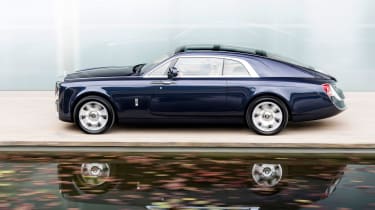 Owning a Rolls-Royce of any description already puts you in a fairly exclusive club. But what if you can’t settle for anything less than completely unique?

That’s the dilemma one Rolls-Royce customer faced, so rather than go elsewhere he approached the brand with a request – to build a one-off, coachbuilt model to his exact specification. Rolls-Royce agreed, and the Sweptail was born.

The client’s brief was simple – the car had to be inspired by his favourite Rolls models of old, particularly the boat-tail tourers from the 1920s. As a collector of yachts both classic and modern, he specified sleek lines that have a nautical touch. The end product is the definition of automotive opulence and luxury – an enormous, two-seater coupe, designed to cross continents in total comfort, with no consideration of the boring financial side of things. 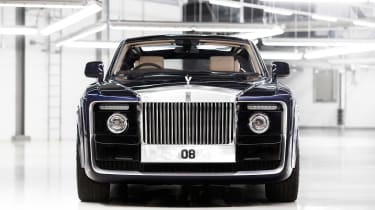 The Sweptail sits on a Phantom platform - fitting, as the halo model of the range is also the largest and most opulent. It's powered by Rolls' 6.6-litre V12 engine, producing an 'adequate' 453bhp.

On the styling front, the most striking part of the car is the treatment of the rear section. Classically upright it ain’t – the roof and rear arches continue back culminating in a long, sleek tail, while the rear window tapers to a point above the boot opening.

Up front, the Sweptail is pure modern Rolls-Royce, with the iconic grille in this instance hand-polished to a brilliant mirror finish. The upright front contrasts with the flowing rear to give the Sweptail a gloriously dramatic look unlike any other Rolls-Royce.

The panoramic glass roof illuminates a minimalist interior, ‘decked’ out in materials as rich as you’d expect from the marque. Dark ebony wood and ‘Dark Spice’ leather are complimented by lighter paldao wood and ‘Moccasin’ leather. The minimalist ethic is taken to the extreme with the dashboard, which ditches everything except for one single physical control – everything else is hidden away to allow the materials to star. 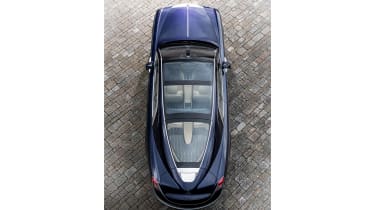 Behind the two enormous front seats, instead of a rear bench you’ll find an vast expanse of wood, ideal for storing designer suitcases on a trans-continental jolly. Above it sits a storage solution we never knew we needed – a hat shelf. How Rolls-Royce is that?

But it gets better. The centre armrest doesn’t conceal a USB port or storage like it does in some cars – instead, it’s a chiller for a bottle of vintage champagne (from the year of the owner’s birth, naturally) and two crystal champagne flutes.

Clearly, you can’t expect to see the Sweptail on a Rolls-Royce forecourt near you any time soon. It’s a one-off built for a specific customer. Rolls-Royce describes it thus: “This customer came to the House of Rolls-Royce with an idea, shared in the creative process where we advised him on his cloth, and then we tailored that cloth to him. You might say we cut the cloth for the suit of clothes that he will be judged by.” 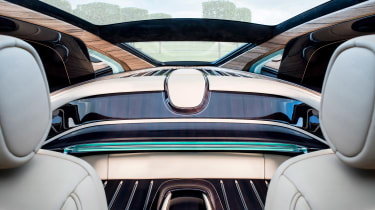 Not a volume seller, then, but the Sweptail does cement Rolls’ position at the head of the luxury car market – and could herald the reintroduction of proper bespoke coachbuilding.

The Sweptail will be on display at the Concorso d’Eleganza at Villa d”Este on the shores of Lake Como this weekend, before heading off to its new home with its (presumably very happy) owner.