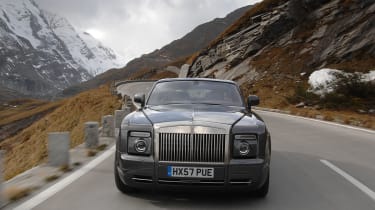 According to the press pack, this new Coupe is ‘the most driver-orientated model in the Phantom line-up’. Fair enough, but then the dynamic capabilities of the rest of the range are hardly cutting edge, are they?

Opulent is perhaps a better way to describe this car, as it shares all the waftyness of its saloon big brother, albeit in a form some ten inches shorter. Entering via the huge – and hugely heavy – rear-hinged doors sets the scene perfectly (no need to heave them closed – a button on the dash takes care of that). Coax the 6.75-litre V12 into life and, so unbelievably quiet is it at tick-over, there is absolutely no way of knowing it’s running.

It could do with a bit more poke further up the rev range, though. If you’d just stepped out of a modern Bentley into this Rolls, you’d be a bit disappointed by the lack of go. It doesn’t feel nearly as quick as it’s official 0-60mph time of 5.6sec, although the chunky 2590kg kerb weight probably doesn’t help here (so much for the all-aluminium construction). Meanwhile, the steering lacks any sort of feel, understeer builds early and the grip levels of the unique run-flat tyres are relatively low by modern standards. The ‘Sport’ button on the steering wheel does little to improve things, either.

But in reality none of this matters. Luxury is what this car is all about. The Coupe is somewhere to lock yourself away at times of stress, as the world seems a far better place when viewed from behind that famous figurine. But after crossing Europe in the Coupe, just as an owner might, I came away feeling that the four-door Phantom – which is around £28K cheaper – is actually the better Rolls-Royce. It simply does what it is designed to do so much better.