Panoz to partner up with electric vehicle manufacturer Green4U 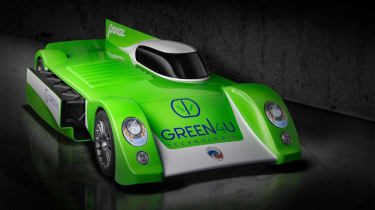 The Panoz GT-EV is a join venture between Panoz and its parent company, Green4U, to produce an electric race car which can go bumper-to-bumper with the current petrol and hybrid elite.

While the car is still in development, the design targets set out by the Vice President of Engineering and Design Brian Willis, are impressive to say the least. But then again, what else would you expect from people who so often rip up the rule book and use its remains to fill their confetti cannons? The bodacious ‘DeltaWing’, a previous Panoz creation, challenged established car designs, seriously undercutting the mass and fuel consumption typical of the racers it competed against.

But back to the GT-EV. It is intended to produce power in the region of 400 to 450kW (536 to 603bhp), which when combined with an estimated total mass of 998kg to 1247kg, should offer truly startling performance. Its range will be 90-110 miles under race conditions, meaning it equals the new Smart ForTwo Electric Drive for range. Perhaps, not a fair comparison as the little German city car only packs 82bhp… The top speed of the GT-EV is targeted to be around the 180mph mark. 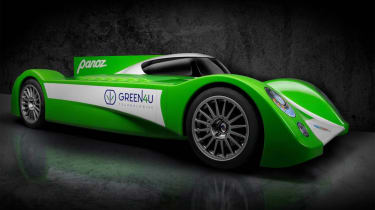 The car’s design has been dramatically shaped around the batteries. For example, the driver is pushed out to the left, where the passenger would normally sit in a car with the steering wheel on the correct side, allowing better weight distribution. Also, battery pack removal is done solely from one side to make it more competitive during racing, as pit lanes are single sided.

Running the battery packs next to the cockpit also means that the driver can sit nice and low within the chassis, which is made from super-light carbon fibre.

To maximise grip and acceleration, the GT-EV will have one electric motor driving the front two wheels and another to drive the rears, making for an all-wheel drive system that has 100% of its torque from 0 rpm. To really push the GT-EV into the upper echelons of performance, Panoz are using active aerodynamics to reduce drag and increase the range and performance. 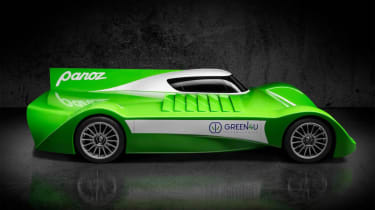 What is perhaps more interesting to the lottery winners amongst us, are the plans for a road-legal version. This eccentric creation is the brain-child of Peter Stevens, who is the same man behind the incredible Panoz Esperante GTR-1. If it only offers a slither of what the GT-EV promises, it will be sure to give road drivers a truly electrifying experience.

Despite Panoz having a long and rich history with motorsport, its partner Green4U was only founded in 2016 and primarily focuses on uninspiring everyday electric vehicles. Hopefully then, with Panoz’s experience of high performance automobiles, and Green4U’s experience with electric vehicles, the GT-EV will soon be hitting the track.