All 24 current Vulcan owners will be given the opportunity to upgrade, gaining a re-tuned gearbox and extra aero 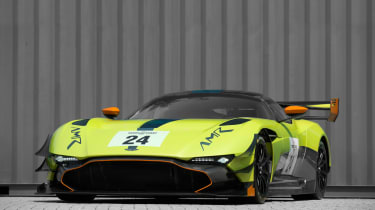 Aston Martin has chosen Goodwood as the venue to display the latest creation built under its AMR Pro brand – an upgrade pack for the hardcore Vulcan hypercar.

The Vulcan AMR Pro package makes the track-only monster even more eye-catching, with an extensive set of extra aerodynamic tweaks and a re-tuned gearbox.

The new aerodynamics are hard to miss. Starting at the front, there are louvred panels above the front wheel arches, designed to extract high-pressure air and reduce front-end lift. Also helping to keep the nose locked down on track is a pair of dive planes on either side, while the front splitter has also been modified with turning vanes fitted on the underside in order to improve steering response. 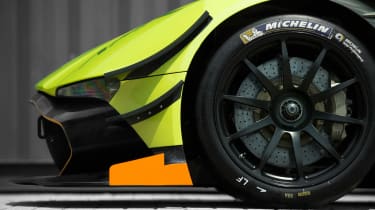 The rear features equally extensive changes. The new rear wing is dual-plane, rather than the single-plane unit that went before. Aston says the main element is a 20mm ‘Gurney flap’ – an upstand on the wing's trailing edge which maximises downforce, helped by slotted endplates.

The end result? Downforce has increased from an already impressive 3150Nm to a staggering 4000Nm. For reference, Aston’s Le Mans-winning Vantage GTE generates 3104Nm. Aston says the aerodynamic changes have also shifted the car’s balance, bringing the centre of pressure closer to the middle of the car.

Along with the extra aero, there’s a weight-saving measure involved. Optimisation of the carbon core has reduced the weight of the engine cover by 5kg – though admittedly that’s not such a big deal when you have 820bhp to play with.

Aston has also re-tuned the gearbox, shortening the ratios for even more brutal acceleration. Aston Martin Racing works driver, Darren Turner, said: ‘It’s an incredible car in every respect - looks, sound and of course, performance. We worked hard to ensure it’s not a monster to drive, so it was important the AMR Pro upgrade remains true to that objective.' 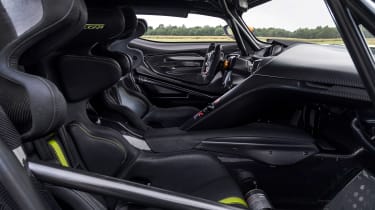 'By increasing the overall level of downforce front and rear, but also improving the balance of the car we’ve done just that. Together with the shortened gearing, which makes it even more punchy when you accelerate through the gears, the Aston Martin Vulcan AMR Pro feels more agile and responsive to steering inputs. When you get the aero working through a fast corner it really is an unbelievable feeling.’

The package is available to all 24 Vulcan owners, with the first already being fitted – customers can expect redelivery in the Autumn. The car is making its dynamic debut at the Goodwood Festival of Speed this weekend.